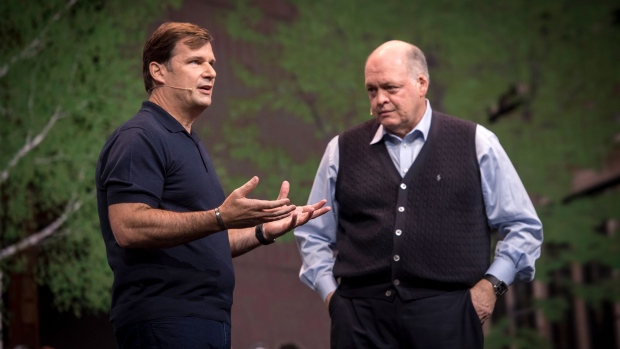 James Farley speaks as Jim Hackett listens during an event at the Consumer Electronics Show in Las Vegas in 2018. , Bloomberg

(Bloomberg) -- Ford Motor Co. Chief Executive Officer Jim Hackett knew it was time to retire -- again -- when he watched his heir apparent rise to the occasion of a global pandemic that the carmaker thought would lead to a $5 billion quarterly loss.

The former office-furniture executive stepped back into a CEO role at the begging of Executive Chairman Bill Ford but had struggled through a stormy tenure at the second-largest U.S. automaker. As Hackett watched Chief Operating Officer Jim Farley shave more than $3 billion off the deficit Ford had been expecting, he realized it was time to leave.

“It kind of hit me like a lightning bolt that this is really the right time,” Hackett, 65, told Bloomberg News in an interview. “I said to myself, ‘If I retire now, Jim can take the advantage of all these things he and I have done together.’”

Farley, 58, is described by peers as having the will and the skill to get Ford out of the rut it’s been in since the departure of Alan Mulally, who hocked the company’s blue-oval logo to hoard cash and was the only Detroit CEO to keep his carmaker out of bankruptcy in 2009. Farley has spoken about the challenges Ford faces now in stark tones and has warned he may continue to break china and bruise egos, as he has on his way to the top.

“For me on a personal level, it’s quite -- sorry, I’m just getting a little emotional,” Farley said, choking back tears during a phone interview. Bill Ford, the great-grandson of founder Henry Ford, convinced Farley to leave Toyota Motor Corp. in the lead-up to the global financial crisis. His own grandfather, an orphan, was employee No. 389 at the company and worked at a factory near Detroit that built Model Ts.

“It’s quite humbling to think about my grandfather going into Highland Park and how humble his life was before that,” Farley said. “How much opportunity happened because of Ford. I just feel very in debt to the company.”

Ford was already on wobbly footing before Farley and Hackett were drawing up plans to recover from months-long factory shutdowns forced by efforts to contain the coronavirus.

The company was two years into an $11 billion restructuring Hackett laid out to update a global vehicle lineup that had gotten stale under his predecessor, Mark Fields. He prioritized loading new models with greater connectivity features and spent heavily on electrifying powertrains and freed up resources by killing off passenger cars in North America.

But the first of Ford’s major redesigns under Hackett’s watch, the Explorer, went awry due to factory personnel and technological problems. The company also has been behind the curve from an electric-vehicle standpoint, with the Mustang Mach-E coming out well after Tesla Inc. has made plug-in models more mainstream.

It took decades for middle managers to convince top brass to bring back the Bronco sport-utility vehicle, and the all-important F-150 has aged relative to General Motors Co. and Fiat Chrysler Automobiles NV full-size pickups.

“We would have thought Hackett would have stayed on through the current product launch cycle (F-150, Bronco) with a transition in 2021,” Joe Spak, an analyst at RBC Capital Markets who rates Ford the equivalent of a hold, wrote to clients. “The timing occurring now to us suggests Ford is ready to take on a more aggressive, faster-moving path forward.”

Read more: The Ford Bronco Is Back, Thanks to a Group of Obsessed Employees

Ford shares rose 2.5% on Tuesday, paring their decline during Hackett’s tenure to 37%.

Hackett said he made it clear to Bill Ford from the beginning that he was “not the long-term solution” for the carmaker when, in 2017, the great-grandson of Henry Ford asked him to come out of retirement. The former CEO of furniture maker Steelcase Inc. said he was more focused on changing Ford’s culture than currying favor with Wall Street.

“I was going to be a challenge for a world where everything revolved around Wall Street,” Hackett said. “What I wanted to do was work from the inside on our employees, on our executives, on motivation to want to change the arc of the company.”

During a call with reporters, Farley named the likes of Amazon Inc., Apple Inc. and Baidu Inc., the Chinese search-engine giant, when listing companies he views as Ford’s competitors. He said the carmaker will push further into digital services as it connects all its vehicles to the internet.

“Will we need new talent to help us get there, to compete against these new competitors? Absolutely,” Farley said. “Do we need to challenge our business model? In some cases we will have to. So it will require new ways and new capabilities.”

While Farley spent almost a year focusing on Ford’s future as president of new businesses, technology and strategy before becoming COO, his ties to Ford’s past go beyond family. Two years ago, he drove his 1965 Ford GT40 in an event loosely based on the famous 24 Hours of Le Mans endurance race. A 1973 Bronco and new Mustang are his vehicles of choice for getting to the office.

“Farley is a life-long car nut and has just very, very deep automotive automotive experience, both at Ford and Toyota,” said David Whiston, an analyst with Morningstar Inc., who rates the company a hold. “Farley is not about an esoteric process or fancy chit-chat. He wants results and he works like a lunatic.”

Building revenue from digital service, while putting out electric and autonomous vehicles, could finally reverse Ford’s six-year stock slide, Farley said during the interview. Its market capitalization has slipped to just $27.2 billion, less than a tenth of Tesla’s stock value.

“We have this incredible opportunity to create value that’s not reflected in our valuation,” he said. “And that’s the intersection between technology and our traditional products. These growth initiatives will really change Ford for many years to come.”