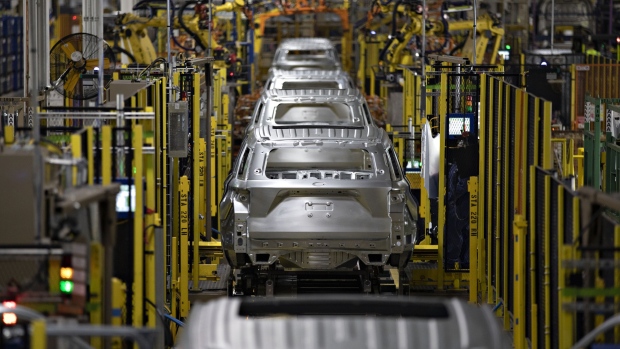 Ford Motor Co. (F:UN) was dealt a blow by Moody’s Investors Service, which cut the carmaker’s credit rating to junk on doubts that a turnaround plan by Chief Executive Officer Jim Hackett will generate earnings and cash quickly enough.

Moody’s downgraded Ford to the highest junk rating, Ba1, saying the automaker’s cash flow and profit margins are below expectations and likely to remain weak over the next two years. The descent to junk status affects one of the largest corporate bond issuers in the U.S. outside the financial sector.

Investors have traded Ford’s debt for roughly the past year at levels that implied the company was headed for junk. Hackett has struggled to win over Wall Street with an overhaul that includes cutting thousands of jobs, reviving an aging line of SUVs and ditching slow-selling sedans.

“It’s a pretty precarious situation that they’re in,” Charlie Chesbrough, senior economist of Cox Automotive, said by phone. “When a company gets a junk status rating, it will mean they have to pay a higher interest rate and it means a lot of institutional investors will have to think twice.”

Ford’s most actively-traded bonds, Ford Motor Credit Co.’s 5.113% bonds due 2029, weakened relative to Treasuries Monday afternoon after Moody’s issued its release. The extra yield, or spread, the notes pay widened 0.3 percentage point to 3.45 percentage points, according to Trace. The automaker’s shares plunged as much as 4.2% to US$9.14 in late trading.

“Ford remains very confident in our plan and progress,” the carmaker said in an emailed statement. “Our underlying business is strong, our balance sheet is solid and we have plenty of liquidity to invest in our compelling strategy for the future.”

It’s not the first time that Ford carried a high-yield rating: The company and its peer General Motors were downgraded to junk by S&P Global Ratings in 2005. Moody’s and Fitch Ratings followed suit later that year. But unlike GM and Chrysler, Ford managed to avoid bankruptcy and government bailouts during the financial crisis.

Still, losing investment-grade status forced Ford to finance itself by essentially putting everything in hock, from its inventory to the rights to its blue oval logo. Chairman Bill Ford described the predicament as “enormously emotional,” saying the founding family was “pledging our heritage.”

When the company reclaimed its investment-grade ratings in 2012, Bill Ford said it was “one of the best days I can remember.”

S&P Global Ratings and Fitch Ratings have a BBB rating on Ford, which is two steps above junk. Both have a negative outlook. As long as the company has at least two ratings above junk, it’s eligible to stay in the biggest investment-grade bond indexes, which means many bond investors won’t be forced to sell all their holdings.

“We think there’s a high probability that if they were to downgrade Ford to BBB-, it would come along with a stable outlook,” said Joel Levington, an analyst at Bloomberg Intelligence. “And if that happened, then you would still be an investment-grade issuer for bond index purposes.”

In July, Ford issued an annual profit forecast that disappointed investors as the automaker struggles to compete in China’s slumping car market. New versions of Ford’s Explorer and Escape SUVs debut this year, and it’s bringing back the Bronco off-roader in 2020.

The downgrade comes just three months after Hackett installed a new Chief Financial Officer, Tim Stone. The former finance executive for Amazon.com Inc. and Snap Inc. is the first CFO the automaker has hired from outside the company since the 1940s.

Ford hasn’t issued unsecured bonds from the parent company level since December 2016, but its finance unit, Ford Motor Credit, is a routine borrower in the investment-grade market, having just sold US$2 billion of bonds last month. The downgrade affects both issuers, which have a combined US$35 billion of debt listed in the Bloomberg Barclays U.S. Corporate Bond Index. The company has a total of US$157.2 billion of debt outstanding, which includes operating lease liabilities.

The cost of insuring Ford’s bonds against default jumped in the derivatives market. Guaranteeing Ford Motor debt now costs 1.9% a year, up 0.22 percentage point from Friday’s levels, according to data compiled by Bloomberg. That’s the biggest one-day jump since March.

“If the economy can skirt recession and if the president can solve this trade war we’re in the midst of, they’re probably going to be OK,” Cox Automotive’s Chesbrough said. “But that’s a lot of ‘ifs.’ And for many investors, it’s too many ‘ifs,’ and they’re just not going to take the chance.”