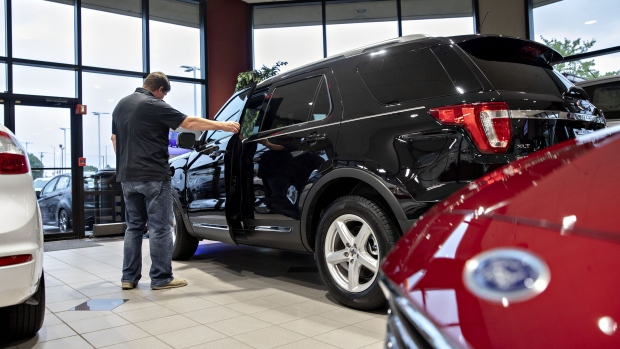 A customer looks over a Ford 2020 Explorer on display at a car dealership in Orland Park, Illinois. Photographer: Daniel Acker/Bloomberg , Bloomberg

Ford Motor Co. cut its full-year forecast by US$500 million in the latest sign an US$11 billion restructuring by Chief Executive Officer Jim Hackett will take more time before a promised payoff.

The profit warning comes after a rocky quarter for the automaker, with North American profit margins edging down due in part to plunging sales of its cash cow Explorer sport-utility vehicle following a bungled launch. That’s the latest headache for Hackett, who is aiming to reverse Ford’s fortunes by cutting thousands of jobs, refreshing an aging SUV lineup and ditching sedans.

Higher warranty costs, elevated incentive spending in North America and lower China sales prompted Ford to slash its outlook for 2019 earnings before interest and taxes to a range between US$6.5 billion and US$7 billion, down from an earlier estimate of US$7 billion to US$7.5 billion.

“Investors have grown impatient,” David Whiston, an analyst with Morningstar in Chicago who rates Ford the equivalent of a buy, said before Ford’s earnings release. “The upside should come late this year and next, when you have more of the new crossovers out. The Explorer is the one thing that seems to be holding things back.”

Even so, the third quarter wasn’t as dire as some analysts expected. Adjusted earnings were 34 cents U.S. a share, more than the average estimate of 26 cents. Automotive revenue declined 2 per cent to US$33.9 billion, falling just short of the average projection for US$34 billion.

“We think Q3 was a good quarter,” Tim Stone, Ford’s chief financial officer, told reporters in Dearborn, Michigan. “The progress we’ve made also indicates we have more work to do.”

“Ford’s lowered guidance seems drastic, but the need for more aggressive spending on incentives to keep U.S. demand churning isn’t uncommon, especially for a company so dependent on its skittish domestic market. Still, there’s a sense this cut may be the first from peers, and Ford won’t be the only automaker unable to outrun a decline in China volume.”

Sales of the remodeled Explorer, which CEO Hackett pointed to as a key to Ford’s turnaround, plunged by almost half in the quarter as a Chicago plant plagued by personnel problems struggled to get the new model out the door. That came after a downgrade to a junk credit rating in September by Moody’s Investors Service, which cited the slowness of his turnaround.

“Simply put, we took on too much,” Joe Hinrichs, Ford’s president of automotive, told analysts about the Explorer launch on a conference call. “And we shouldn’t have. So part of the lessons learned is, obviously, go back to how we manage these launches and sequence them in a way that gives the team a chance to be successful.”

Hackett told analysts, “We have higher expectations for our performance.”

The automaker’s third-quarter profit margin in the all-important North American market, which accounts for more than two-thirds of Ford’s revenue, slipped 0.2 percentage points from a year ago to 8.6 per cent. That stemmed from higher incentive spending needed to move more metal out of its showrooms.

“It’s a competitive environment,” Stone said. “And there are some new entrants in the environment in the SUV space and certainly in trucks as well. In that environment, we want to provide outstanding value to customers.”

The intense rivalry for SUV buyers loyalty comes at a time when Ford is relying more on sales of these vehicles -- and its best-selling F-Series pickup. The automaker is ending U.S. production and sales of sedans, which have fallen out of favor with many American drivers, but that makes it more dependent on strong SUV sales to pick up the slack.

“Ford’s SUV sales suffered due to the ‘ambitious’ ramp up of its new 2020 Explorer, Lincoln Aviator and Escape,” David Kudla, chief investment strategist at Mainstay Capital Management, said in an Oct. 21 note to investors. “That is not a vehicle segment you want to lose ground in in the U.S. market.”

Robust truck sales continued to keep North American operations solidly profitable, with earnings before interest and taxes of US$2 billion, unchanged from last year. The company’s U.S. sales fell 4.9 per cent in the third quarter, as it awaits the new products meant to reverse the slide.

Outside of North America, the automaker lost money in every major region, including China. Sales plunged there 30.3 per cent in the third quarter, as Ford works to update an aging product line and contends with the first slowdown in a generation in the world’s largest auto market. It lost US$281 million before interest and taxes in the quarter.

In the European market, where Ford is cutting 12,000 jobs, sales rose 3.1 per cent in the third quarter in the traditional 20 markets on a surge in sales of its Focus small car and SUVs such as the Kuga. But the carmaker lost US$179 million in the period.

“We are experiencing more headwinds than we expected in the fourth quarter,” Hackett said on the conference call. “We’re disappointed by this, but we’re confident that we’re laying the groundwork” for sustained improvement in profit.

Ford faces contract negotiations with the United Auto Workers, as the union seeks ratification of a tentative agreement it reached with General Motors Co. last week. Evercore ISI estimates the deal could represent a “one time hit” of as much as US$500 million for Ford in the fourth quarter.