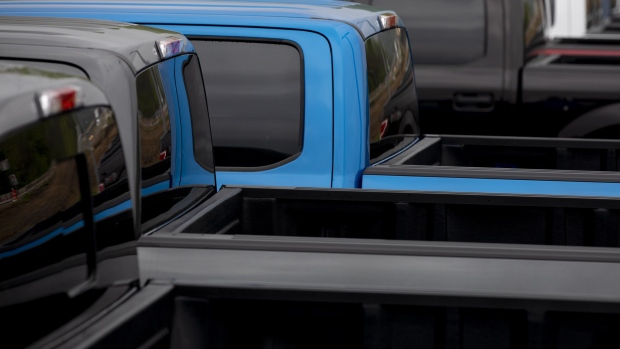 (Bloomberg) -- SK Innovation Co.’s Korean-made batteries will be banned from the U.S. for 10 years, dealing a potential blow to efforts by Ford Motor Co. and Volkswagen AG to ramp up production of electric vehicles.

SK Innovation will be able to import components for four years beginning now for domestic battery production for Ford’s EV F-150 launching next year, and for Volkswagen’s American MEB line for two years, to give the automakers time to transition to new domestic suppliers, the International Trade Commission ordered.

SK Innovation has said its U.S. factory being constructed in Georgia is scheduled to begin initial operations later this year, though some of the components will come from overseas.

LG Chem Ltd., also from Korea, has accused SK Innovation of stealing its battery-making secrets, and won the order from the trade agency Wednesday. The ITC affirmed a judge’s decision that the import ban was the appropriate punishment for SK Innovation destroying evidence LG Chem said it needed to prove its case.

SK Innovation and the automakers can petition President Joe Biden to veto the import ban on public policy grounds. If the president doesn’t take any action, the order will take effect in 60 days. SK Innovation, which called the decision “regrettable,” has argued that its EV battery efforts are key to the president’s green energy agenda.

SK Innovation said in a statement it is “fortunate that the decision has a grace period so that the company can provide batteries to Volkswagen and Ford.”

While Ford had warned the agency in May that “EV batteries cannot simply be swapped like batteries in a flashlight,” the Detroit automaker on Wednesday said that its plans won’t be derailed. Ford last week announced it would double its investment to $22 billion through 2025 to electrify its lineup.

“This ITC decision supports our plans to bring the all-electric Ford F-150 to market in mid-2022,” Ford said in an emailed statement Wednesday. “Providing this zero-emissions, purpose-built truck for our customers is an important part of our plan to lead the electric vehicle revolution and is a top priority for the company.”

LG Chem, which spun off its battery business as a new subsidiary, LG Energy Solution, on Dec. 1, had been seeking a 10-year ban on both batteries and the components. LG Chem has a factory in Holland, Michigan. General Motors Co. and LG Chem also are planning a battery factory in Ohio for use in GM vehicles.

The two South Korean companies are competing for a bigger share of what’s expected to be a fast-rising market for batteries that power electric vehicles, putting the automakers in the middle.

This is the first of two cases LG Chem filed against SK Innovation at the Washington agency. SK Innovation, which has publicly said it wants to settle the dispute, filed its own case as a way to bring pressure on LG Chem.

In the case before the commission, LG Chem accused SK Innovation of hiring away more than 70 employees so it could gain access to highly sensitive information on ways to make the batteries, and then destroying evidence to ensure LG Chem wouldn’t be able to prove its case.

LG Chem’s unit claimed that SK Innovation was able to get billions of dollars worth of contracts with the U.S. automakers and subsidies for its Georgia plant because of the theft of its secrets.

“SKI’s total disregard of our warnings and intellectual property rights gave us no choice but to file this case,” Jong Hyun Kim, chief executive officer of LG Energy Solution, said in a statement.

SK Innovation questioned whether the information it had received was secret, and denied any wrongdoing. It said a default judgment in favor of LG Chem was too harsh a punishment.

The company said it would “continue to seek measures to protect clients’ interests” and would seek a veto from the Biden administration.

Trade Judge Cameron Elliot said SK Innovation’s destruction of documents was “done with a culpable state of mind and with the intent to hide evidence of trade secret misappropriation.”

While LG Chem said it would be able to fill the need for EV batteries in the U.S., Ford and Volkswagen said the batteries are uniquely designed for the specific vehicle and have to undergo extensive testing, a process that can take years.

The commission said it was tailoring its import ban in view of the public interest considerations raised by the automakers. SK Innovation also will be able to bring in replacement batteries for Kia Motors Corp. electric vehicles already sold to U.S. customers.

SK Innovation also is banned from selling any batteries, battery packs or components it already imported that were part of the LG Chem investigation, according to orders posted on the agency’s electronic docket. The commission’s full opinion is not yet public, to allow lawyers for both sides to redact confidential information.

(Updates with SK statement in fifth and sixth paragraphs.)