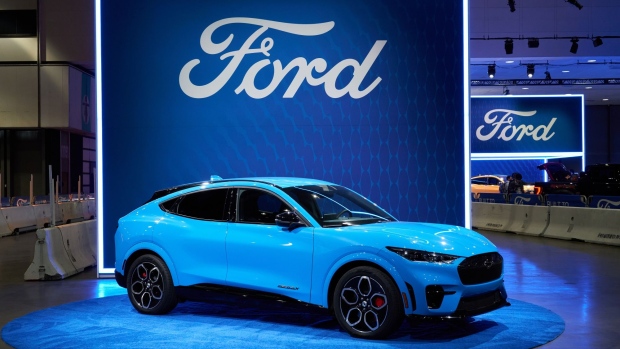 Ford Motor Co. moved to second place in U.S. electric-vehicle sales, behind Tesla Inc. and overtaking General Motors Co., whose Chevrolet Bolt EV has been hobbled by a recall.

Ford’s performance was buoyed by the Mustang Mach-E, which notched 27,140 sales in 2021, its first full year on the market, according to a statement Wednesday. The automaker recently said it is tripling production at the Mexican plant that builds the plug-in car. On Tuesday, Ford said it is doubling production of the battery-powered F-150 Lightning pickup going on sale this spring, which sent the company’s stock to a 20-year high.

The shares added to the gains Wednesday, climbing 1.4 per cent to US$24.65 at 11:07 a.m. in New York after the company released results for December and all of 2021. The stock rose 136 per cent last year, making Ford the biggest gainer among auto stocks.

In December, Ford’s light-vehicle sales fell 17.2 per cent as sales of F-Series trucks, its biggest moneymaker, tumbled 15.7 per cent.

For the year, Ford sold 1.9 million vehicles, finishing in third place in the U.S. race behind GM and new leader Toyota Motor Corp. But Ford noted it had the highest sales among U.S. automakers in the fourth quarter, as it debuted the Maverick small pickup, which sold 13,258 in its first months on the market. It also said it ended the year with the most inventory of any automaker, despite the continuing chip shortage.

“If we can get to the full levels of production and manage some of the disruptions that we’ve seen as an industry, but certainly as a company, if we can manage that, I think we’re in a good position to grow,” Andrew Frick, Ford’s U.S. sales chief, said on a conference call with reporters Wednesday.

GM halted production of the Bolt for the final two months of the year as it worked on a fix for a defect that could cause battery fires. Forecaster LMC Automotive sees GM recapturing its second-place spot, though Ford Chief Executive Officer Jim Farley contends his company will pull away with the F-150 Lightning that received nearly 200,000 nonbinding reservations.

“We’re poised to stay in second and that’s our aspiration, to become the clear No. 2 electric-vehicle maker,” Frick said. “With Lightning and E-Transit coming on this year, that obviously just puts us in a much better position.”