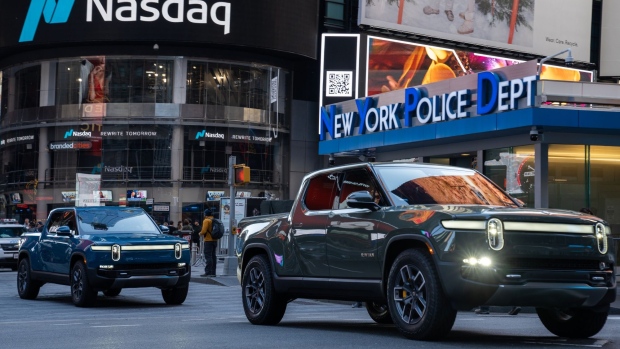 Rivian R1T electric vehicle (EV) pickup trucks move along the assembly line at the company's manufacturing facility in Normal, Illinois, US., on Monday, April 11, 2022. Rivian Automotive Inc. produced 2,553 vehicles in the first quarter as the maker of plug-in trucks contended with a snarled supply chain and pandemic challenges. , Bloomberg

(Bloomberg) -- Ford Motor Co. sold more shares of Rivian Automotive Inc. Friday, offloading more than $400 million worth of stock in the electric car maker since the end of a lockup this week.

The US automotive giant sold 7 million shares of Rivian stock at $26.88 each on Friday, according to a filing, cutting its stake in the company to nearly 87 million shares. The transaction follows the sale of 8 million Rivian shares at $26.80 apiece Monday, after selling restrictions on certain insiders and investors ended.

Ford had invested $1.2 billion in Rivian and saw the value of its stake surge in the wake of the EV maker’s public debut, the largest in the U.S. last year. Since then, however, Rivian’s stock has cratered from a high of $172 in November to touch a low of $19.25 this week.

Ford described the share sale as “prudent,” but wouldn’t say what the proceeds will be used for or if it planned to further trim its stake.

“It’s not unusual to see investors take an opportunity like this after a successful IPO,” a spokesperson from Rivian said in a statement. “We remain focused on delivering on our vision to create a more sustainable future powered by EVs, and building long-term value for all of our current and future shareholders.”

Dearborn, Michigan-based Ford is making its own electric pickup truck, the F150 Lightning, which is seeing early success. Chief Executive Officer Jim Farley said in a Bloomberg interview in January that “everything is on the table,” when asked about his company’s stake in Rivian.