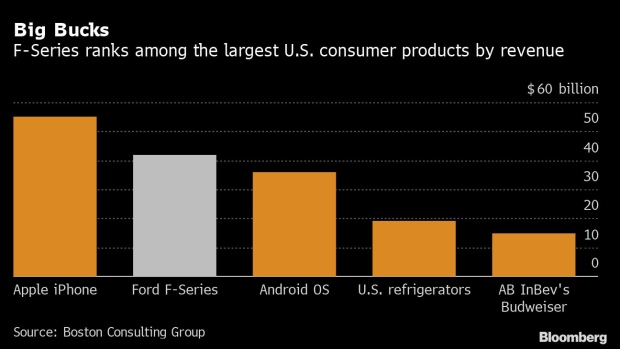 Robotic arms operate on the bed frame of a truck at the Ford Motor Co. Dearborn Truck Plant in Dearborn, Michigan, U.S., on Thursday, Sept. 27, 2018. Ford Motor Co. is watching trade talks closely. With almost 40 percent of its revenue coming from outside North America and factories in Mexico and Canada, the second-largest U.S. automaker has a lot at stake in the outcomes of the Trump administration's myriad negotiations and tariff schemes. Photographer: Sean Proctor/Bloomberg , Bloomberg

(Bloomberg) -- Ford Motor Co. has a lot riding on the overhauled F-150 pickup it’s unveiling this week. Rather than shy away from the stakes, the automaker has given a look under the hood of its cash-cow truck franchise.

The almost 900,000 F-Series pickups sold last year generated about $42 billion in revenue, according to a study Ford commissioned from the Boston Consulting Group. That ranks near Apple Inc.’s iPhone among the biggest U.S. consumer products. On its own, F-Series is larger than McDonald’s Corp., Nike Inc., Coca-Cola Co. and Starbucks Corp.

“It’s the crown jewels of the business,” Hau Thai-Tang, Ford’s product development chief, said in an interview. The revenue figure BCG cites is almost 30% of the total Ford reported for its automotive business last year. “There’s no product more important for us, and when the F-150 chief engineer calls, he usually gets all the help he needs.”

The F-Series line of trucks supports roughly half a million jobs and contributes $49 billion annually to U.S. gross domestic product, the study found. BCG computed the truck’s economic impact by looking at how much employment and revenue is tied directly to Ford and indirectly to its suppliers, dealers and employees’ tertiary spending.

“The F-Series stands out because it has a much higher price point than most other products,” said Michael Book, a senior partner at BCG, who helped author the study. “It’s quite remarkable how high the revenue is.”