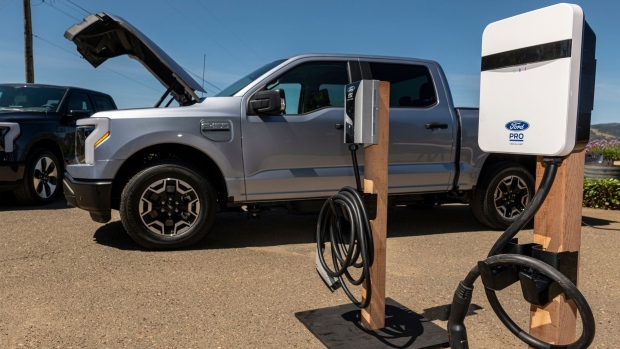 A Ford F-150 Lightning at a charging station. , Bloomberg

(Bloomberg) -- Ford Motor Co.’s new laundry list of battery-metals suppliers reads like a who’s who of the mining world, spanning the globe from Argentine lithium to Indonesian nickel.

The agreements, including announcements with mega miners BHP Group and Rio Tinto Group, are the latest sign of how big automakers are rushing to secure raw material supply and sidestep shortages. Yet the most consequential deal of all may be one putting iron at the center of Ford’s electric-vehicle plans.

Surging prices for battery materials have hammered profitability for carmakers this year and prompted warnings that raw material shortages could put the brakes on the electric-vehicle revolution. Western automakers mostly use nickel-cobalt-manganese, or NCM, batteries. In addition to soaring metal costs, cobalt comes with its unique set of worries because the vast majority of reserves are in a single country: the Democratic Republic of Congo.

The other main type of battery, lithium-iron-phosphate or LFP, is cheaper and more stable, but generally seen as less powerful than NCMs. However, technology has been improving -- championed by Chinese battery powerhouse Contemporary Amperex Technology Co. Ltd., or CATL -- and Tesla Inc. announced last year it would shift to LFPs for standard-range cars as part of efforts to reduce costs.

Responding to the looming supply crisis, Ford announced on Thursday that it’s been traversing the globe signing long-term supply agreements with the world’s largest miners, refiners and battery-makers.

But it also struck a deal to buy a huge volume of CATL’s iron-based battery packs for use in its Mustang Mach-E and the F-150 Lightning, easing its current-reliance on nickel-based cells while putting LFP chemistry into two of its most powerful models.

To be sure, the company will still be heavily exposed to any further volatility in prices for lithium, which have surged much more than the other metals. But iron is far more abundant and affordable than nickel and cobalt, which will reduce costs and limit supply risks.

“They’re effectively taking the donkey of the battery world and putting it into the Mustang,” said Tom Price, head of commodities strategy at Liberum Capital. “LFP is undeniably the cheap option when it comes to batteries, but if they can turn it into a slick and powerful outperformer, then it will be a significant development for the EV world,” he said.

On the raw-materials side, Ford announced a lengthy list of agreements on both nickel and lithium, although most of them are nonbinding and involve plans to “explore opportunities.” It did announce a binding offtake agreement for lithium carbonate from a project in Nevada, among several announcements related to local processing of battery materials in North America.

“Automotive companies broadly will need to be quick to make these many deals, because down the road when this transition begins to take route it will be difficult to source these metals that are critical,” Bart Melek, the head commodity strategist at Toronto Dominion Bank, said in a phone interview. “If you don’t have these deals it becomes questionable whether you will be able to deliver what you promised in terms of new EV capacity.”

If the move to LFPs seems risky given potential concerns about performance, it’s worth noting that CATL and Ford both have a track record of defying doubts about their technological innovations. Ford was mocked by rivals when it switched out the steel used in the body of F-150 trucks in favor of aluminum, but the move ultimately proved highly successful.

Speaking to media and analysts, Lisa Drake, Ford’s Chief Operating Officer for North America, declined to reveal the horsepower on those models with LFP batteries. The longer-range versions of the Mach-E and F-150 Lightning will continue to use NCM batteries, Ford said.

“I’d love to get into this today. But we really just want to focus on the capacities that we’ve installed and the battery-cell raw material change,” she said. “When we get to the product launch, I think you’re going to hear a lot more about this.”