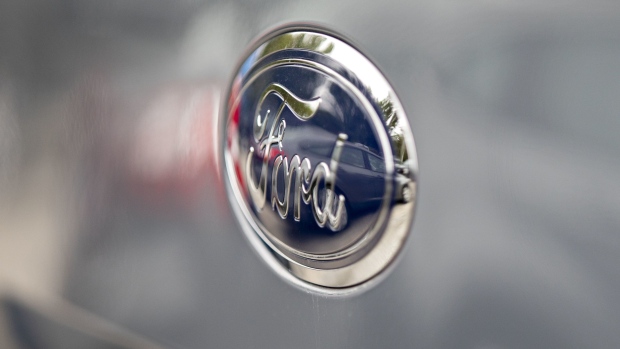 A Ford Motor Co. badge is seen on a vehicle displayed at a car dealership in Orland Park, Illinois, U.S., on Friday, Sept. 27, 2019. Auto sales in the U.S. probably took a big step back in September, setting the stage for hefty incentive spending by carmakers struggling to clear old models from dealers' inventory. Photographer: Daniel Acker/Bloomberg , Bloomberg

(Bloomberg) -- Ford Motor Co. dealers in India face potential legal action from customers after the U.S. auto giant decided to shut its factories in the country.

Dealers will likely face “legal complications” given that Indian consumer law makes them liable after a manufacturer exits, Vinkesh Gulati, president of the Federation of Automobile Dealers Associations, said in an interview with Bloomberg TV.

“We expect Ford to give some compensation to dealers and plan something in future so that dealers aren’t in a legal strangle against customers in consumer court cases for their service responsibility,” Gulati said.

Separately, Gulati said the auto industry is losing 20% to 30% of potential sales each month because the global semiconductor shortage has led to long waiting periods for cars.

“I’m hoping customers stay with us and when the semiconductor shortage is gone they actually buy the vehicle, and we don’t lose this vehicle to used-car market,” said Gulati.