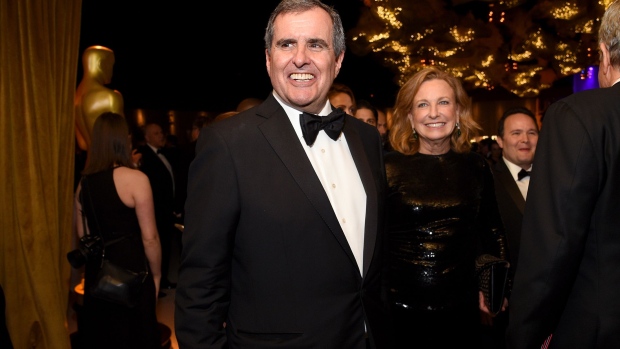 (Bloomberg) -- The economy may be slowing down, but money is still flowing into Hollywood.

Providence Equity Partners will provide as much as $500 million in equity to a new holding company called North Road Co. that Chernin will use to fund future acquisitions, the companies said Tuesday. Apollo Global Management Inc., through managed affiliates, is supplying $300 million in debt financing, some of which Chernin has already used to acquire the US assets of Red Arrow Studios from the European media company ProSiebenSat.1 Media SE.

Chernin paid about $180 million for five studios under the Red Arrow banner, according to two people familiar with the deal. They include Kinetic Content, producer of the Netflix Inc. hit dating shows “Love is Blind” and “The Ultimatum.”

Chernin is rolling up several companies under North Road. It will be the home to production shops, including his namesake company, which made the movies “Ford v. Ferrari” and “Rise of the Planet of the Apes,” as well as Words + Pictures, an unscripted production house he co-founded with former ESPN executive Connor Schell. North Road is valued at more than $1 billion, said the people, who asked not to be identified discussing the terms.

The competition between streaming services to find the next hit show has enticed financial firms to invest billions of dollars into production companies and studios in the past few years. While recent subscriber losses at Netflix have cast a shadow over Hollywood in recent months, the entertainment industry is producing more TV shows and movies than ever.

“Content spending is like athlete salaries, it’s one of those things that hasn’t declined ever,” said Davis Noell, senior managing director and co-head of North America at Providence. Providence has been investing alongside Chernin for 15 years.

Chernin and Noell say that output will remain high so long as Netflix, Walt Disney Co, Apple Inc. and Amazon.com Inc. are expanding overseas and competing for streaming customers. These services acquire most of the rights for a project in advance, ensuring North Road of a profit on almost everything it produces. All of North Road’s divisions are profitable, Chernin said.

“The big change historically is it’s possible to run a profitable business in the independent production space because of this new model,” Chernin said.

North Road now has more than 60 projects in production across its different divisions. It will finance some of the less-expensive unscripted projects while relying on streaming services and studios to fund the more ambitious ones.

North Road will make a big push overseas, Chernin said, led by Jan Frouman, the former head of Red Arrow. Frouman will serve as president of North Road and orchestrate its international expansion with help from Kristin Jones, who previously ran international programming for AMC Networks.