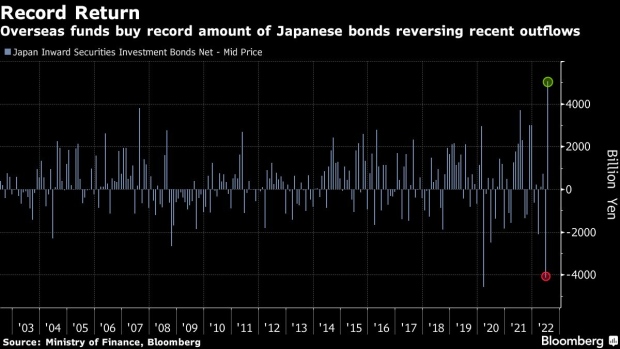 (Bloomberg) -- Foreign investors snapped up a record amount of long-term Japanese bonds in July amid a global debt rally and as expectations for a central bank policy tweak faded.

Overseas funds were net buyers of 5.06 trillion yen ($37.4 billion) of Japanese bonds -- mostly government securities -- more than reversing a net sale of 4.1 trillion yen in June which was the largest since 2020. The Bank of Japan stood by its policy of rock-bottom interest rates, a benchmark yield cap of 0.25% and unprecedented asset purchases last month.

Japan’s bond market has been roiled by speculative attacks this year as traders bet accelerating global inflation would force the BOJ to tweak policy. Now those inflation fears have given way to concern that higher interest rates across much of the globe will stifle economic growth.