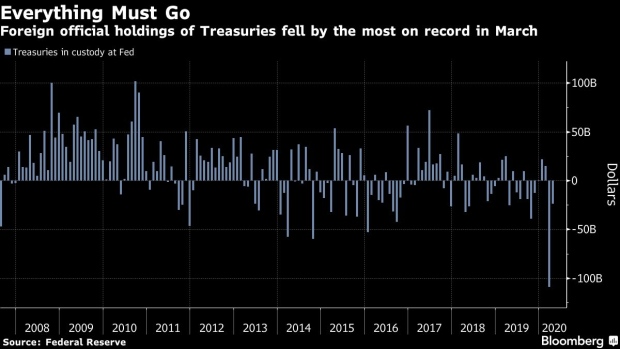 (Bloomberg) -- Foreign official holdings of Treasuries stashed at the Federal Reserve fell $109 billion in March, the largest monthly drop on record, as international governments and central banks struggled with the economic fallout from the new coronavirus.

The decline showed up in the Fed’s weekly custody data, with the latest figure released Thursday showing a $24 billion drop in the week to April 1.

The sales amid the past month’s pandemic-fueled turmoil are a further signal of the global rush to raise U.S. dollars as the Fed’s recently expanded dollar swap lines are accessible to only 14 central banks. Countries reliant on oil exports and smaller Asian economies have been selling U.S. debt, according to traders and market makers familiar with the transactions, and central banks have been primarily offloading older, less-liquid Treasuries.

The Fed on Tuesday rolled out a temporary repurchase agreement facility that will allow a broader range of central banks to swap Treasuries for dollars, effective April 6.

“The fact that they can go to the Fed and repo these securities out for cash -- at a slightly punitive rate, but they can still do that -- should cap the potential price impact” in the U.S. government debt market, said Jon Hill, rates strategist at BMO Capital Markets.

The Fed stopped short of saying it wanted to prevent a snowball effect from the central-bank Treasuries selling, but said Tuesday that the new program will provide “an alternative temporary source of U.S. dollars other than sales of securities in the open market.” The statement didn’t specify if all central banks would be involved.

As fear swept through markets last month and fueled unprecedented volatility, liquidity -- the ability to trade without causing significant price moves -- deteriorated in Treasuries to its worst since the 2008 financial crisis. At the same time, the greenback surged as investors sought refuge in the world’s primary reserve currency. The Fed has acted to calm debt markets to avert knock-on economic effects, by announcing trillions of dollars of purchases of assets including Treasuries and mortgage-backed securities.