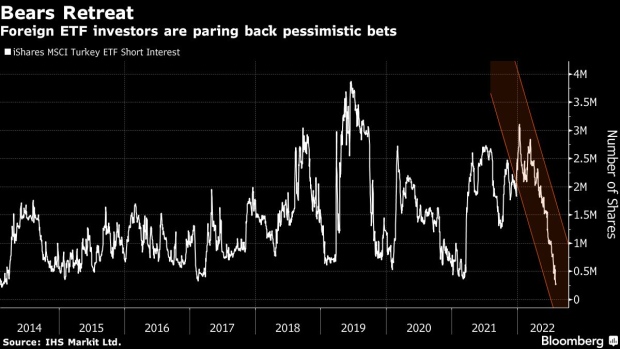 Tourists and locals on the waterfront in Istanbul, Turkey, on Friday, June 24, 2022. Tourism arrivals in May surged 308% year-on-year, boosting hopes that a rebound in the sector can support the weakening Lira. Photographer: Erhan Demirtas/Bloomberg , Bloomberg

Foreign investors are bailing on their bearish wagers against Turkish stocks, with short positions on an exchange-traded fund falling to their lowest level since early 2014.

About 2% of the shares of the iShares MSCI Turkey ETF (ticker TUR) has been sold short, down from 20% in March, according to data from IHS Markit Ltd. Investors are unwinding their positions amid a world-beating rally in Turkish equities, which has been fueled by local participants in the market seeking a hedge against out-of-control inflation.

While the New York-traded fund is small by ETF standards, with only $250 million in assets, it’s seen as a gauge of international interest in Turkish stocks. The dollar-denominated ETF is up 8.8% so far this year.

“The decline in shorts is a bullish sign,” said Athanasios Psarofagis, a Bloomberg Intelligence ETF analyst. “Sentiment was pretty low and markets rebounded pretty aggressive in July and that likely forced lots of short covering.”

Local investors, however, have been pouring cash into the market. Turkey’s benchmark BIST 100 Index has jumped 50% this year to a new record high, making it the world’s top performer in local currency terms. Even after stripping out the impact of the lira’s 26% decline against the dollar this year, it’s still among the top 15 global performers for the period.

With gains for the Turkish bourse accelerating since mid-July, the number of shares shorted fell this month to 1.63 million, the lowest level since March 2021, according to data from S3 Partners.

To be sure, the long-term investment picture is still grim, and soaring inflation and a weak currency have driven investors out of the market, even as locals jump in. Since the start of January, foreigners have offloaded $3.6 billion in holdings of Turkish shares, according to the country’s central bank.

Foreign ownership of Turkish stocks stands at a near record low of 33%, compared with a historical average of about twice that level.