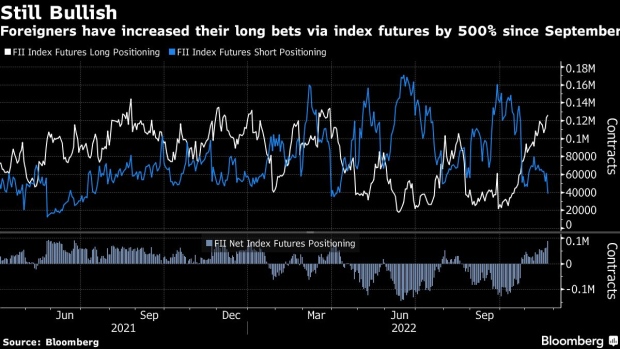 Global funds have bought a net $3 billion of India stocks so far this month, according to Bloomberg-compiled data. Holdings of foreign investors in long index futures have risen by about six times from their September lows, to 127,000 contracts, while short bets have dropped 76% over the same period to 38,600 lots -- the least bearish positioning since April. The spread between outstanding index futures longs and shorts now stands at its widest since June 2021.

The renewed confidence after a sell-off in June helped key stock gauges touch new peaks, extending a rally driven by resilient domestic demand in one of the world’s fastest-growing major economies. Asian markets such as India and Indonesia have emerged as safe havens for investors looking for higher returns as the Federal Reserve signals slower interest-rate hikes.

Options data shows similar trends. The difference between long and short positioning in index calls has climbed steadily and is now at its highest in seven years, while that for index puts has continued to shrink, signaling foreign investors see more gains ahead in India equities despite risk of a global recession.

Local institutions, which provided critical support to Indian markets during foreigners’ record exodus earlier this year, have been “largely sitting on the fence or booking profits” and this has led to foreigners being the driving force for the rally, said Abhilash Pagaria, an analyst at Nuvama Wealth Management Ltd. in Mumbai.