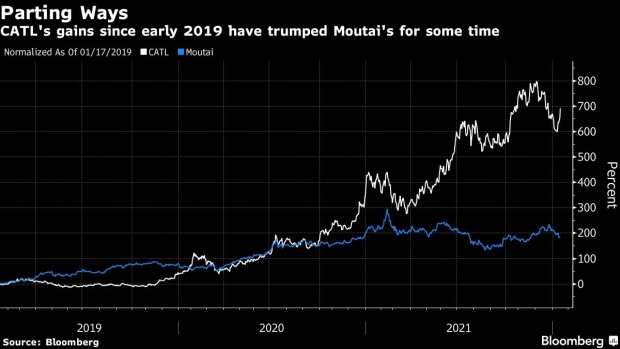 Solar panels stand in front of the Contemporary Amperex Technology Co. (CATL) headquarters building in this aerial photograph taken in Ningde, Fujian province, China, on Wednesday, June 3, 2020. CATL's battery products are in the vehicles of almost every major global auto brand, and starting this month they'll also power electric cars manufactured by Tesla at its factory on the outskirts of Shanghai. , Bloomberg

(Bloomberg) -- A peak could be around the corner for Contemporary Amperex Technology Co., if recent history on foreign ownership is any guide.

After months of buying, foreign funds owned 8.5% of the Chinese battery giant as of last week, more than quadrupling in just two years. That’s approaching a record level last reached with Kweichow Moutai Co., raising questions over whether the trade is overcrowded.

As the world’s biggest electric-vehicle battery maker, CATL has surged some 470% since 2020, buoyed by demand for renewable stocks. The remarkable run has brought in ever-increasing overseas participation, with some cautioning of over-valuation while others point out that foreign selling would amplify share losses in a down market.

“There are a lot of factors at play, especially valuations and returns on the investment, that determine when foreign holdings will peak, but it’s always prudent to be more cautious on shares when the ownership ratio enters a relatively high range like this,” said Huang Yuhang, a fund manager at Lanqern Capital Management Co.

For Moutai, the nation’s largest stock, foreign ownership had peaked in March 2019 at 9.6%. While the shares continued to rally after that, selling by global funds added to its losses last year when it saw a drawdown of as much as 40% from a February peak as momentum in expensive shares unraveled.

While some point out that CATL’s foreign ownership is lower than during the peak for Moutai, 9.6% is still a record for the five biggest stocks listed in Chinese mainland markets. This suggests that for CATL, it may be nearing an inflection point for offshore holdings.

To be sure, foreign ownership is just one of many factors that affect share moves, and any divestment process could be drawn out and not in lock-step with share price trajectories.

CATL has recovered 13% in the past four sessions following a 22% drop from its December peak. Forward-looking valuations on the stock is now at 70 times, just over half the level of last year’s high. Still, for some foreign investors, that isn’t enticing enough.

Even when acknowledging the uniqueness of the China market, “it still gets a little bit difficult when you see the other kinds of businesses that you can buy at much lower multiples,” said Edward Lees, a portfolio manager at BNP Paribas Asset Management who does not hold the stock.