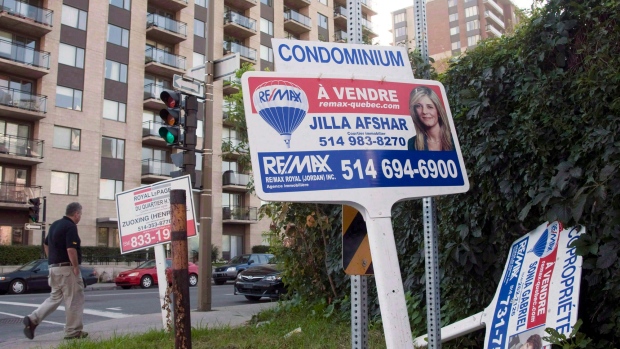 A real estate sign stands in front of a condo on September 27, 2011 in Montreal. , The Canadian Press

Foreign ownership in Montreal's condo market spiked this year, according to data released on Thursday by Canada Mortgage and Housing Corporation.

Non-residents owned 7.6 per cent of condos in downtown Montreal and nearby Nuns' Island in 2017, compared to the ownership rate of 4.3 per cent in 2016.

Meanwhile, the ownership rate was stable in the Vancouver and Toronto census metropolitan areas, at 2.2 per cent and 2.5 per cent respectively.

"The lack of growth in Toronto and Vancouver, combined with the increases in Montreal, indicate the possibility of a shift from these centres after the introduction of foreign buyers' taxes in Ontario and British Columbia," said CMHC Chief Economist Bob Dugan in a press release.

There has been some belief foreign buyers could target Quebec's largest city after British Columbia and Ontario introduced taxes on non-residents. Quebec's finance minister, however, hasn't indicated he's in any rush to intervene.

"The trigger point wouldn't necessarily be any one given percentage, but any sort sudden acceleration in the rate of foreign buyers. That would get our attention," Carlos Leitao told BNN in a television interview on Nov. 22.

"I'm not in any great rush to come up with new tax measures. I still don't think it's necessary or even appropriate in the Montreal context," he added at the time.