The nation’s equities are on pace to record the lowest foreign inflows since 2012, according to data compiled by Bloomberg -- just $970 million as of the end of August. Overseas investors have sold out of Canadian stocks for five out of eight months this year. This comes as the S&P/TSX Composite Index gained more than 14 per cent, putting it among the best developed equity markets it the world.

“At times of risk -- macro, geopolitics or trade -- investors sell assets from other areas and focus on the safety of U.S. equities,” said Greg Taylor, chief investment officer at Purpose Investments. “Canada, being a small weight in many global benchmarks, is easy to ignore and from an equity point of view is thought of as acting closer to emerging markets, given its resource exposure.”

In addition to global turmoil, investors now have a minority government led by Prime Minister Justin Trudeau to deal with. 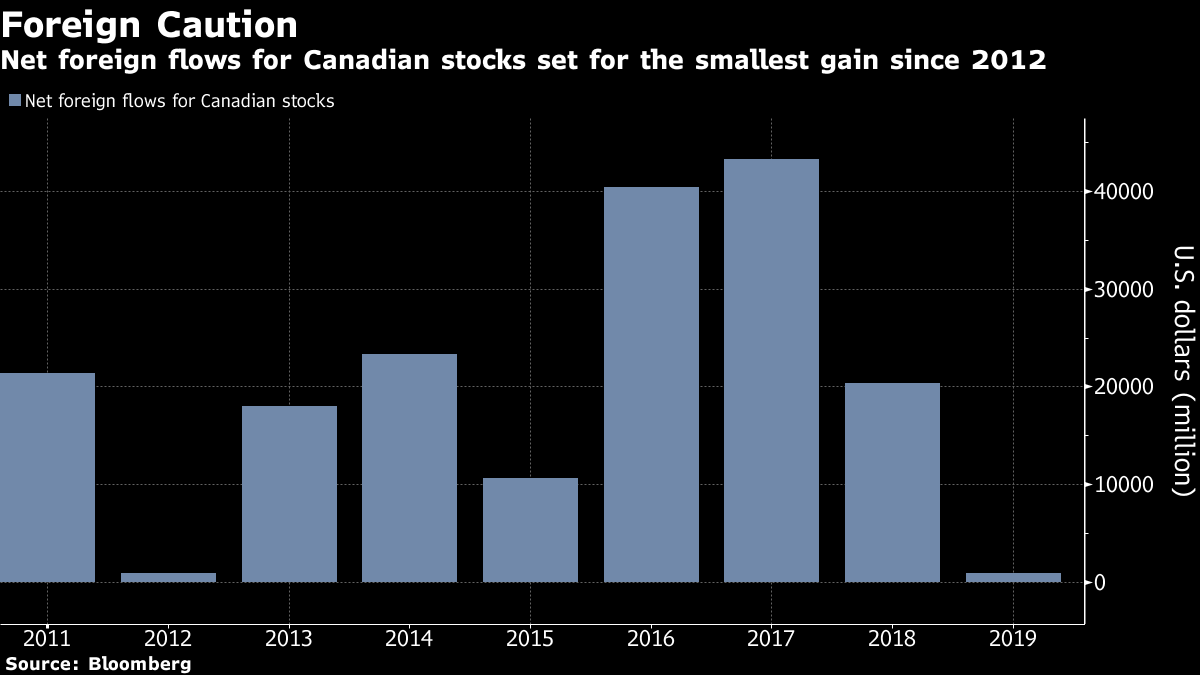 Canada has traditionally been seen as a destination for investors looking for a higher risk-reward ratio with energy and mining stocks making up almost a third of the benchmark. But the energy sector has been flailing as foreign companies pull investment from oil sands projects amid a slump in Canadian crude versus the U.S. benchmark due to pipeline bottlenecks.

“Sector exposure is also a reason for a lack of foreign investment,” Taylor said. “Increasingly we are hearing international investors are concerned with the lack of pipelines being built and a widening pricing discount.”

With the loss of a majority in parliament, Trudeau’s Liberal Party will need support from parties such as the New Democrats or the Bloc Quebecois to get legislation through. While Trans Mountain has already been approved by cabinet, both parties have previously expressed opposition to the project and oil pipelines in general.

“It will be a less popular destination for international funds, for money, for investing,” said Thomas Caldwell, chairman of Caldwell Securities Ltd. “My gut feel is we will see deficits, we will see less productive spending, less attractive environment to invest funds.” 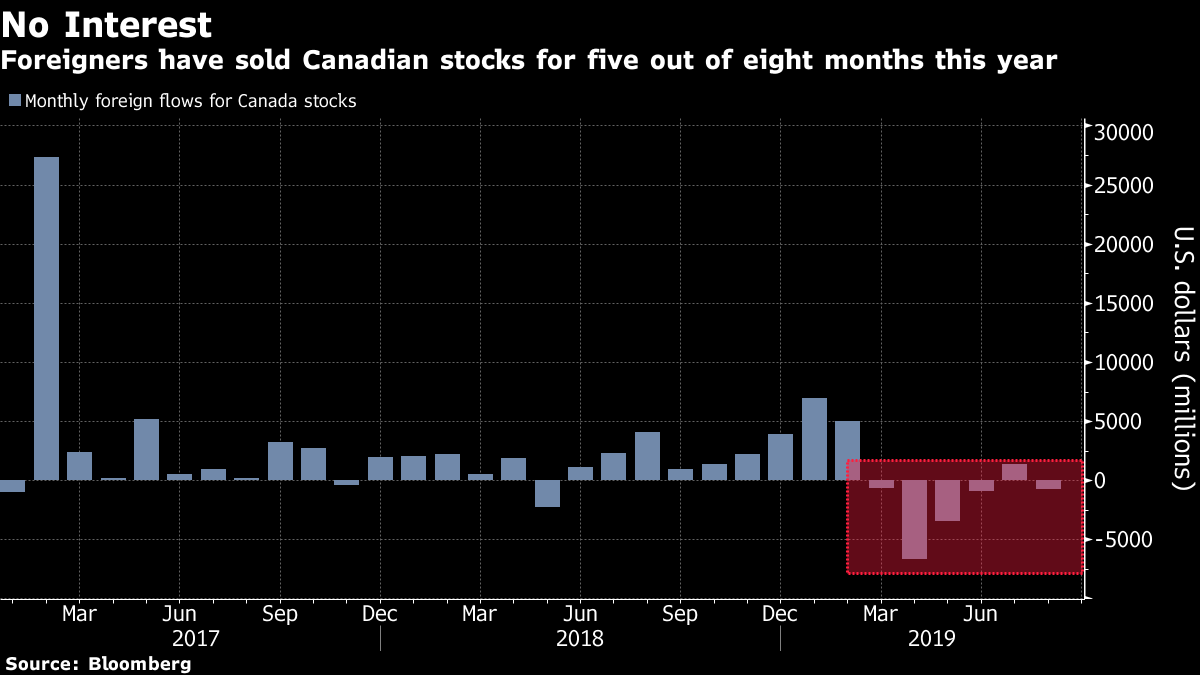 A rising Canadian dollar hasn’t been enough to tempt foreign investors into stocks. The loonie is the top-performing currency against the U.S. dollar among its global peers this year, rising more than 4 per cent, for those attracted to a sound economy and scorching job market.

Hedge funds and other large speculators increased net Canadian dollar longs to 12,961 contracts in the week ended Oct. 15, from 5,313 he previous week, according to the Commodity Futures Trading Commission. That was the highest in about a month.

Inflows into bonds haven’t been great either. As of August, net foreign capital in the bond market stood at about $26 billion, compared with $40 billion last year at the same time and $61 billion in 2017.

“We are probably going to continue to see Canadian yields rise along with Treasuries on renewed optimism that global growth concerns will be alleviated,” said Edward Moya, a senior market strategist at Oanda Corp. “The Canadian dollar is likely to remain supported against the greenback but probably not so much against its other major trading partners.”

The strong correlation between foreign flows and the “resource-centric” equity performance is waning this year and that was last seen in 2007 before the global financial crisis, according to Martin Roberge, analyst at Canaccord Genuity.

“While global economic conditions do not look as dire, growth is weak and our momentum indicators are still declining,” he said in an Oct. 21 report. The firm has an underweight call on Canadian stocks and recommends getting back into the market when foreign flows near or fall into “contraction territory.”

--With assistance from Michael Bellusci, Doug Alexander and Susanne Barton.