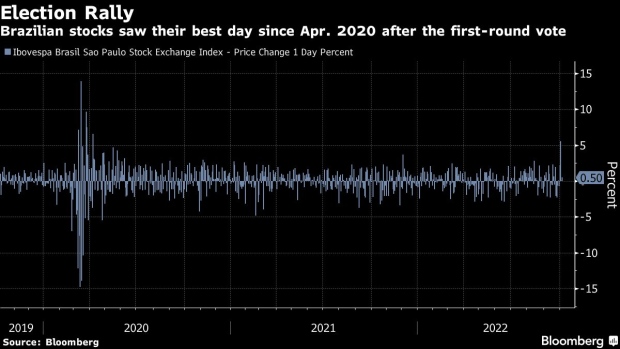 Jair Bolsonaro, Brazil's president, center, speaks to members of the media after casting a ballot at a polling station during the first round of presidential elections in Rio de Janeiro, Brazil, on Sunday, Oct. 2, 2022. Brazilians head to the polls to choose between re-electing Bolsonaro or returning former President Luiz Inácio Lula da Silva to office. Photographer: Pedro Prado/Bloomberg , Bloomberg

Non-residents added about 2.4 billion reais ($460 million) to local stocks Monday, the biggest daily net inflow since mid-August, according to exchange data compiled by Bloomberg that excludes any potential influx from equity offerings.

The benchmark Ibovespa equity index jumped 5.5% on that day, its biggest daily gain since April 2020, on the view that a tighter race may force the front-runner to unveil more orthodox economic proposals in order to garner support for the second round. On top of that, the strong showing of right-wing parties in Congressional elections is expected to prevent Lula from implementing more radical measures if elected.

Lula’s running mate Geraldo Alckmin said he expects other economists to join former central bank chief Arminio Fraga and announce support for the leftist leader ahead of the Oct. 30 runoff. Investor focus is shifting to any clue that corroborates their belief that, no matter who takes over on Jan. 1, Brazil will keep moving forward with economic reforms and fiscal responsibility.

Brazilian stocks are outperforming a sharp drop for the MSCI All Country World Index since the beginning of the year. Still, despite the 12% gain for the MSCI Brazil index in that period, it trades at 6.9 times forward earnings, compared to its 10-year historical average of 11.2 times.

A Bolsonaro win would signal “a continuation of privatization,” said Ray Zucaro, the chief investment officer at RVX Asset Management in Miami.

Including money from share offerings, Brazilian stocks have seen a net foreign inflow of over 89 billion reais since the beginning of the year. Besides attractive multiples, the fact that Brazilian central bank is likely done with the tightening cycle is also supportive for stock pickers.