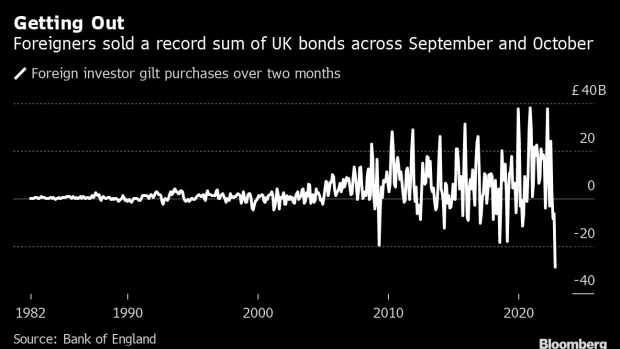 City workers cross the Millennium Bridge as they commute to work in London, UK, on Monday, Oct. 31, 2022. UK business confidence dropped to its lowest since March 2021 when the country was struggling with a coronavirus lockdown despite some firms expecting an improvement in trading prospects. Photographer: Jason Alden/Bloomberg , Bloomberg

(Bloomberg) -- Data from the Bank of England showed foreigners sold a record amount of gilts in September and October, as after-shocks from the UK’s ill-starred  “mini-budget” pulsed through UK debt markets.

UK 10-year government borrowing costs have since tumbled one-and-a-half percentage points and money markets have pared wagers on the peak in interest rates to 4.7% next year from levels as high as 6.25% seen in late September in the mini-budget aftermath.

The BOE has said it will start to sell the government bonds bought as part of its emergency intervention on Tuesday in a way it says is designed to avoid causing further market turbulence.