For new brands, large growth and scale could be a thing of the past: Retail expert

(Bloomberg Opinion) -- Forever 21 Inc. has learned the hard way that the allegiance of teen shoppers is anything but everlasting.

The fast-fashion retailer filed for bankruptcy late Sunday, saying it has obtained US$350 million in financing to help it stay afloat. The company said it plans to close most of its Asian and European stores in order to focus on its core business in North America.

The bankruptcy is, of course, another signal of the punishing pressures of the broader “retail apocalypse,” in which the rise of e-commerce is siphoning away shoppers from brick-and-mortar chains, forcing them to collectively shutter thousands of stores. But Forever 21’s troubles also are an emblem of a new and important dynamic shaping the U.S. apparel market: Fast fashion, once a formidable retail niche, is falling behind.

In the first two decades of the 2000s, the trifecta of Forever 21, H&M and Inditex SA’s Zara had punishing impact on mid-priced mall heavyweights such as Gap Inc., Abercrombie & Fitch Co. and American Eagle Outfitters Inc., stealing away the high school and college set by peddling trendier garments and refreshing their merchandise offerings at a much quicker pace. The Great Recession helped support their rise, as it meant shoppers were especially focused on low prices.

Now, though, there are clear signs that some shoppers are souring on this model. Forever 21 and others of its ilk have long been go-tos for what is essentially disposable clothing – a trend you’re sure will be fleeting, an outfit you don’t want to be seen in more than once on Instagram, etc. But just as sustainability concerns upended the food and beauty industries years ago, they are starting to factor more into clothing purchases. And it could contribute to a backlash to what was essentially a years-long binge on cheap polyester. 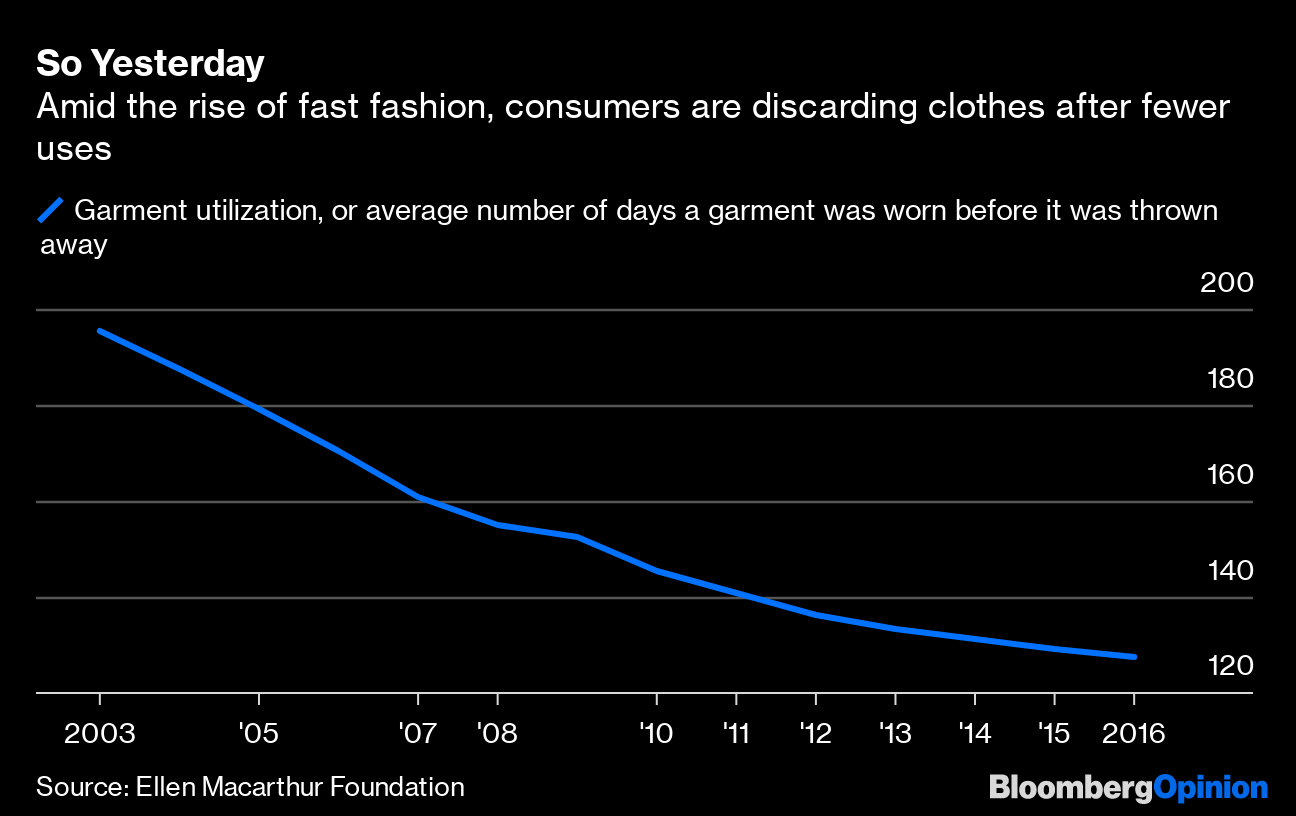 To the extent that many shoppers are still embracing fast fashion, there are now many more options for them to scratch their itch for of-the-moment clothing than when Forever 21 was gathering steam. Chains such as Gap, Old Navy and Urban Outfitters Inc. have sped up their supply chains to be more reactive to new trends. Plus, many chains including Ann Taylor, Express and Bloomingdale’s are now joining upstart Rent The Runway in the clothing rental business.

Digital-centric players such as Boohoo, Fashion Nova and Asos have given them fresh options, and low-priced, U.K.-based brick-and-mortar chain Primark is starting to open U.S. stores. On top of that, digitally-enabled secondhand selling is gaining traction. The stock market debut of The RealReal Inc. and Foot Locker Inc.’s US$100 million investment in sneaker re-seller Goat were signals of the strong expectations of growth for this model. Simply put, there are more options now for having a constantly-refreshing wardrobe that don’t necessarily depend on fast fashion.

All of those changes are making it difficult for Forever 21 to stay relevant. In fact, the collective U.S. market share of the Big Three of fast fashion peaked in 2015, according to data from Euromonitor.

Of course, Forever 21’s bankruptcy also is a result of other factors, including the pace at which it opened stores and its decision to have so many of them in enclosed malls. But the chain’s troubles signal a new era of opportunity for capturing the dollars of Generation Z and millennial shoppers. Its struggling neighbors at the mall should take note.