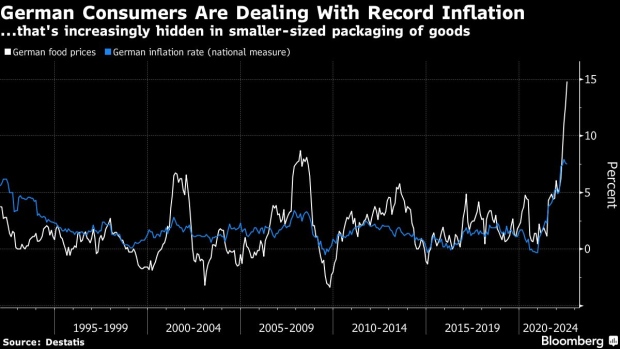 (Bloomberg) -- German shoppers are getting increasingly angry at attempts to hike goods prices by stealth.

While so-called shrinkflation -- where the cost of a product stays the same though its size declines -- isn’t a new phenomenon, consumer-protection authorities in Europe’s top economy are being inundated by complaints.

Its Hamburg branch alone received about 100 in the past two weeks -- a record that’s three to five times above the norm.

The group’s list of “bluff packages” includes 14% inflation for gummy bears and 20% for potato chips. Manufacturers have called a 25% price jump for some margarines an “exceptional step in difficult times” caused by “dramatic cost increases across the whole supply chain, including raw materials.”

Food prices are the biggest driver of German inflation after energy, rising at an annual pace of 14% in July -- almost twice as much as the overall index. That’s stretching the budgets of low-income households which, after more than two years of pandemic disruptions, have dwindling cash buffers.

“What we’re seeing now is really just the beginning,” according to Armin Valet, a nutrition specialist at the consumer-protection authority in Hamburg. He struggles to think of any product group without examples.

“Between selling goods in old packaging and planning, producing and delivering new ones, preparations for covert price increases take about half a year,” he said. “Experience suggests this shrinkflation scam will be heavily used in the fall, winter and early next year.”

Germany’s statistics office is aware of what’s happening and says it isn’t fooled by such tactics. Price collectors tracking the costs of more than 300,000 goods and services each month also make note of the volumes they’re offered in. Prices are then converted so data reflect consumers’ pain.

German inflation will peak at 9.1% this quarter before gradually falling toward 2%, Bloomberg Economics predicts.