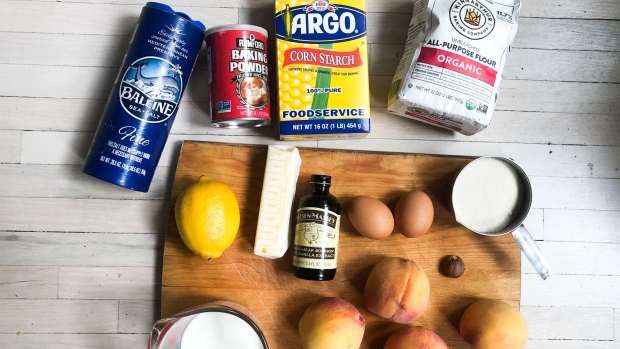 (Bloomberg) -- Editor’s Note: As we leave our home kitchens to dine out more, the weekly Lunch Break column will evolve to highlight dishes from a variety of sources: a new or reopened restaurant; a newsmaking person, place, or recipe; or, of course, a great cookbook.

Yes, pumpkin spice season arrived early this year (as it seems to do every year). But that isn’t stopping peaches, which are still kicking around after a strong summer. There’s time to grab them from market stalls before they disappear with fall’s arrival.

That’s what Gina DePalma would do. The legendary pastry chef ruled the kitchen at Babbo in downtown New York in its heyday before she passed away in 2015 at the age of 49, with a second cookbook unpublished. She created singular desserts that leaned Italian, such as maple mascarpone cheesecake and a mesmerizing saffron panna cotta. This was an intoxicating version of Italian-American cooking that has since been popularized by the Carbone crew; along with the savory menu, it was a sensation in late ‘90’s New York.

“When Babbo opened, it really was a change in restaurants, high-end places didn’t serve dishes like brain ravioli,” says Ruth Reichl, who gave the place three stars as the restaurant critic for the New York Times. “In those days, when you went to Italian restaurants it was tiramisu, tiramisu, tiramisu. Gina’s desserts pushed the envelope. I’m not a huge sweets eater—but her desserts, I wanted.”

Now a former colleague is working to bring DePalma’s shelved book to the public. Food writer Adam Reiner, author of the Restaurant Manifesto blog, calls “My Sweet Italy” “the greatest cookbook never published.” The manuscript includes more than 100 recipes, almost all desserts, and chronicles trips to Italy in a style that the late Anthony Bourdain, a DePalma fan, would have admired.

“Very few people made Babbo more special than Gina,” says Reiner, who worked there with her for about 10 years as a server. “She came up in the time of emerging rock star-chef culture, where women weren’t invited to participate,” so she didn’t get the attention she deserved, he notes.

What makes her unpublished cookbook important is that it demonstrates what the chef could create beyond the constraints of restaurant desserts. Reiner points out that many of DePalma’s bestselling sweets were conceived without on-the-ground research. “She was the premier Italian pastry chef in America, and hadn’t been to Italy,” says Reiner. (DePalma didn’t make her first trip there until 2004.) “This book shows what she could really do.”

“My Sweet Italy” includes such treats as a fresh fig budino and pistachio-studded honey semifreddo. These are evocative, uncomplicated desserts that make you want to run to the kitchen and start measuring. One of the simplest recipes is Mom’s peach cake. While most of the focus is on regional cakes, tarts, and cookies, DePalma included a “Tradizione” section stocked with her most personal baking endeavors. “Traditional recipes represent important and cherished beliefs,” DePalma wrote in the chapter heading, “contained in the form of a family favorite or local delicacy that may seem insignificant to outsiders but are rich in symbolism and meaning.”

DePalma’s cake is fully that—and a late summer blast: The tender cake practically melts in your mouth. The soft peaches bake into the batter, perfuming the top with fruitiness. DePalma added a little cornstarch to the fruit to hold onto the juices, giving the peaches an appealing, pie-like quality.

For those who were big fans of DePalma, it feels like a lovely and unexpected connection. In season, she served her saffron panna cotta with poached peaches. It was my favorite dessert in all of New York.

The following recipe is adapted from the unpublished manuscript, “My Sweet Italy,” by Gina DePalma.

Preheat the oven to 350F. Butter and flour a 9-inch round cake pan.

In a medium bowl, stir together the flour, salt, baking powder, and nutmeg.

In a large bowl, beat the softened butter and ¾ cup of sugar together until light. Add egg and egg yolk and vanilla and lemon zest, and beat until combined, scraping down the sides of the bowl as necessary. Beat in the flour mixture on low speed just until incorporated, then add the milk and beat on medium speed until the batter is creamy and emulsified. Spread the batter evenly into the prepared pan.

Scrub the peaches under running water to remove any fuzz, then halve and pit them. Cut each peach into eight slices. Place the slices in a bowl and toss with the lemon juice, cornstarch and remaining 1 tbsp sugar. Arrange the peaches in a circular pattern on top of the cake batter, spooning any accumulated juice over the top. If desired, sprinkle with the turbinado sugar.

Bake the cake for about 40 minutes or until puffed—firm to the touch and golden and pulling away from the sides of the pan.

Let the cake cool in the pan for 15 minutes. Run a knife around the edges and then carefully invert it onto a large plate. Set another large plate on top and invert, so it ends with the peach side up. Let cool. (Alternatively, you can serve the cooled cake from the pan.) Cut into wedges, and serve with vanilla gelato or ice cream.