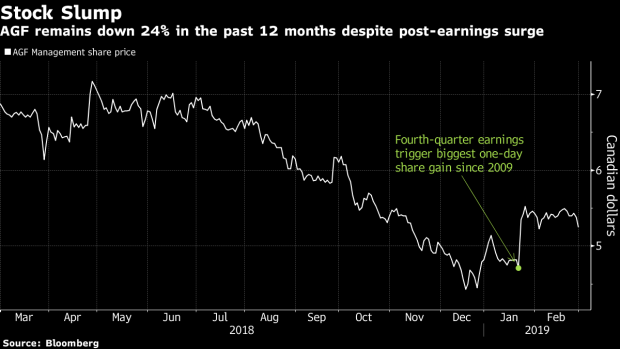 (Bloomberg) -- AGF Management Ltd. has gone underweight equities in its balanced funds for the first time in more than five years as the Canadian investment firm braces for rocky markets ahead.

Managing volatility has become a theme for the C$38 billion ($29 billion) asset manager, whose clients are finding it increasingly difficult to stomach another market meltdown, Chief Executive Officer Kevin McCreadie said. In addition to reducing exposure to stocks, the Toronto-based firm’s growing suite of exchange-traded funds feature risk mitigation and it continues to build out its alternatives business.

“It’s not grabbing the last nickel when you’re at these junctures of the market to risk being run over,” McCreadie said in an interview at Bloomberg’s Toronto office. The 58-year-old took over last year as CEO from Blake Goldring, son of the founder who stepped aside after 18 years at the helm to become executive chairman. “Playing defense is probably more attractive to the investor community today.”

AGF posted the first net inflow into its retail business in more than a decade in 2018 as the firm’s pivot toward ETFs and alternatives begins to bear fruit. Like most Canadian asset managers, the 61-year-old firm is struggling against an investor stampede toward less costly index-tracking funds. ETFs attracted C$20.9 billion in new assets last year, compared with just C$109 million for mutual funds. Even so, at the end of 2018 mutual fund assets still dwarfed ETFs at C$1.42 trillion versus C$156.8 billion.

AGF’s shares surged 14 percent on Jan. 23, the most in a decade, after the company beat fourth-quarter earnings estimates and analysts praised its plan to cut costs by 4 percent in 2019. Still, the stock, trading around C$5.38, remains about 85 percent below its peak in 2007.

Judy Goldring, AGF’s president and chief administrative officer, declined to say whether the cost-cutting plan would mean a reduction in headcount, which stood at 652 on Nov. 30. It could include changes to benefits or the firm’s job-title structure, she said.

“It’s just really looking at the entire operation,” from the cost perspective, said Goldring, the 53-year-old sister of Blake. “Certainly in the last 10 years, 20 years that I’ve been here, we’ve never really taken a thoughtful approach from a broader organizational perspective on this.”

AGF plans to boost alternative assets to about C$5 billion by 2022 from about C$2.1 billion currently, McCreadie said. That includes in its InstarAGF Asset Management Inc. business, which focuses on mid-market infrastructure in North America and includes two funds totaling about C$1.64 billion.

McCreadie also sees assets in its ETFs growing to about C$5 billion from about C$1.46 billion million over the same time as the company builds out its AGFiQ business focused on multi-factor and quantitative strategies. That includes the first global fixed-income ETF backed by those strategies in Canada, he said.

The firm’s 18-member AGFiQ unit is probably one of the deepest quant teams in Canada and will cater to a big chunk of growth in its institutional business as their demands become more bespoke -- and necessary as the bull market ages, said McCreadie.

Equities will probably “grind” higher through the end of the year, said McCreadie, who’s also AGF’s chief investment officer. The company has raised its cash exposure in both its equity and bond portfolios, pushing it to 7.1 percent cash in its AGF Elements Balanced Portfolio mutual fund for example away from equities.

“I do think advisers have been damaged a bit by the volatility in the fall,” said McCreadie. A typical 40-year-old client may have lost a bunch of money in the tech wreck in 2000, won it back only to face the financial crisis of 2008 and then the boomerang of the last few months, he said.

“They’re sitting there today and they’re going to be 59. I think that brings up the fact people don’t want to go through this again.”

To contact the reporter on this story: Jacqueline Thorpe in Toronto at jthorpe23@bloomberg.net

To contact the editors responsible for this story: David Scanlan at dscanlan@bloomberg.net, Richard Richtmyer, Carlos Caminada