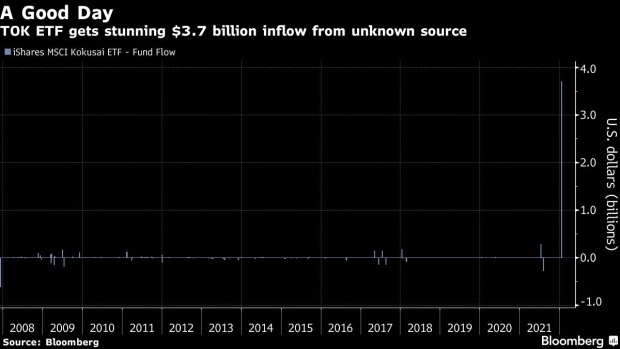 (Bloomberg) -- A lifeless BlackRock Inc. ETF with barely any day-to-day inflows over the past 15 years just got a $3.7 billion allocation in one go.

Launched in 2007, the iShares MSCI Kokusai exchange-traded fund (ticker TOK) has until now failed to generate much investor interest in its mission to bid up large and mid-cap companies around the globe excluding Japan.

Yet on Tuesday, it brought in billions -- quite the game-changer given the ETF’s usual habit of posting virtually zero flows in either direction. TOK started the week managing less than $200 million, and assets haven’t been above $500 million since 2014.

Exactly who is behind the flow is unclear. A spokesperson for BlackRock declined to comment.

“It’s extremely rare for an ETF to be way below the radar and have no underlying or limited trading and then gather $3 billion in one day,” said Todd Rosenbluth, head of ETF research at CFRA. He speculated the inflow might be a Japanese investor seeking to diversify outside of the country, although there are more liquid, cheaper and larger products to execute such a strategy.

The sudden influx of cash also has all the hallmarks of a so-called model portfolio allocation. Large asset managers like BlackRock, Vanguard Group and Charles Schwab Corp. increasingly bundle funds into ready-made portfolios for financial advisers to offer clients. Investors have poured in trillions, and if a tweak is made to a strategy -- substituting one ETF for another, for example -- billions can move at a time.

Model portfolios have been suspected in a series of other mega flows, including for several BlackRock products.

“The $3.7 billion into a fund on one day when the fund previously had just $184 million in AUM is a strange move and definitely an outlier,” said James Seyffart, ETF analyst at Bloomberg Intelligence. “It seems like it may be a model portfolio move because it’s so large and so specific.”

Seyffart noted that there were similar moves in TOK in July, when the fund received $279 million and then several weeks later saw the same amount leave.

“I’ll be watching going forward into early February to see if there is a corresponding outflow like we saw on a smaller scale this summer,” he said.

TOK has returned about 162% since inception, according to data compiled by Bloomberg, compared with 145% for the MSCI All-Country World Index.