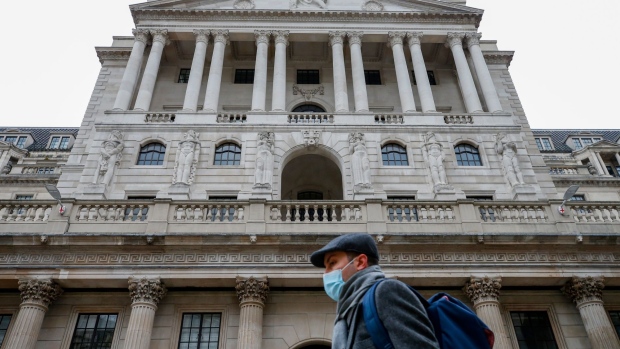 A pedestrian wearing a face mask walks past the Bank of England (BOE) in the City of London, U.K., on Thursday, March 18, 2021. The Bank of England is likely to emphasize its high bar for tightening monetary policy, a move to tamp down speculation that a quick recovery will force policy makers to push U.K. borrowing costs higher. , Bloomberg

(Bloomberg) -- A former Bank of England policymaker said the central bank overdid quantitative easing during the pandemic, without properly assessing whether it was needed.

“It was very clear that they were buying just the lowest amount needed to achieve some stabilization,” he told a conference in London Thursday. “That was very different to the experience in the March 2020 episode when I was on the committee and we just bought gigantic amounts without feedback from the market. We just kept doing it, and doing it.”

His comments echo those of BOE Chief Economist Huw Pill, who earlier this month suggested that continuing stimulus during the pandemic was a mistake and contributed to the current sky-high inflation rate. Pill was not a member of the Monetary Policy Committee at the time.

Vlieghe, a member from 2015 to 2021, said that the central bank had probably gone too far in its QE efforts. “In retrospect, we waited far too long before saying markets are quite stable now, you don’t need to buy these huge volumes anymore.”

Vlieghe also accused Truss and her team of setting the stage for the market turmoil in September and October by attacking the BOE and the Office for Budget Responsibility, the UK fiscal watchdog, during the Conservative Party leadership campaign.

“They also spent the summer brutally undermining the independence of the Bank of England, and of the OBR, and making lots of noise saying the Bank of England’s mandate wasn’t fit for purpose and the government needs to have a lot more say over how things get done,” he said. “That was deeply unhelpful.”