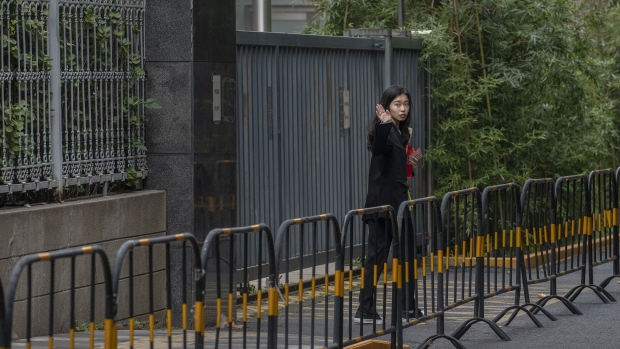 (Bloomberg) -- A former intern at China’s state television broadcaster says she will appeal after a court in Beijing dismissed her sexual harassment lawsuit.

The court said in a statement late Tuesday that Zhou Xiaoxuan’s claim alleging China Central Television host Zhu Jun sexually harassed her in 2014 lacked evidence. Zhu had denied the accusation, which was brought in a civil suit.

Zhou said in a statement after the hearing that the judge declined to allow her to present some evidence and to let a psychologist testify, and complained that she was allowed little time to present her case.

Zhou said she would appeal the decision but indicated that the legal process that started in 2018 had been tiring. “I have made all the efforts I could,” she said. “I think the past three years, from when I stood forward in 2018 to now, there is no way to duplicate this in my life.”

Women in China face a raft of challenges when turning to the legal system to have their accusations of sexual misconduct by men heard. The nation’s courts give little weight to testimony in general, making it difficult for women whose cases depend on their testimony, Darius Longarino, a senior fellow at Yale Law School’s Paul Tsai China Center who has worked extensively on China’s sexual harassment civil legal framework, said before the hearing.

Zhou says her social media accounts have been suspended, and state media outlets have not reported widely on the case.