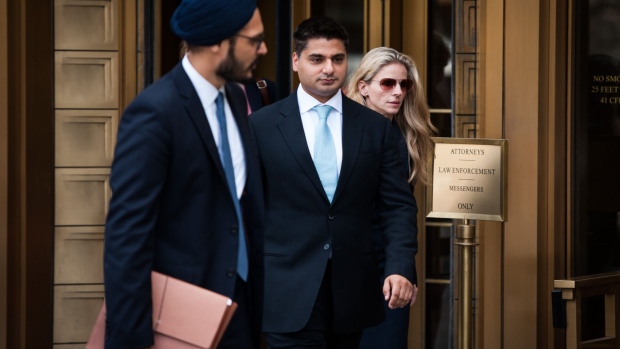 (Bloomberg) -- A former Citigroup Inc. trader claims the bank purposely mischaracterized his comments in online chat groups to try to make him its scapegoat in a US criminal probe of foreign-exchange price fixing.

Rohan Ramchandani alleges in a suit seeking $112 million in damages that a former Citi executive reviewed thousands of his chat communications, many containing trader jargon, and misleadingly “translated” them for prosecutors in a way that falsely implicated him. He was found not guilty after a trial in 2018.

Some of the evidence that Ramchandani hopes to use to prove his case was supposed to remain secret, but was inadvertently disclosed when his legal team redacted it in a way that left it temporarily vulnerable to review by the public.

The banking giant worked to pin a target on Ramchandani’s back for prosecutors, despite knowing he was innocent of any crime, to shield higher-ups and limit the damage to the company itself, according to the lawsuit, which was filed in 2019 and is moving toward a possible trial. Citigroup in 2015 pleaded guilty to a single criminal charge of conspiring to fix prices and rig bids on trading of US dollars and euros, paying a $925 million fine to resolve its part in a sprawling price-fixing scandal.

“Citi’s lead ‘decoder’ of chat conversations” had “a personal interest in implicating Ramchandani, so as to protect himself,” leading to false accusations, Ramchandani’s lawyer argued in a letter laying out his evidence, some of which was intended to remain secret. The allegation, which was redacted, cited notes of a Justice Department interview.

In addition to mistranslating his online trader-speak, Citi falsely told prosecutors that FX price-fixing at the bank was limited to him, according to the letter.

“Citi knew that, by grounding its plea solely on an account of purportedly criminal conduct by Ramchandani, Citi was making his indictment a virtual certainty,” David Lurie, one of Ramchandani’s lawyers, wrote in part of an Oct. 5 letter that was posted to the court’s public docket. The section, which cited a Citi defense lawyer, was redacted to shield “highly sensitive” material from public view.

But the full letter could be read by copying and pasting blacked-out sections, allowing anyone with a computer to view material in the letter that was intended to stay secret. Ramchandani’s team withdrew the letter and replaced it with redactions that could not be read after being asked about the document by a reporter.

“As we have maintained, Mr. Ramchandani’s claims are without merit and we will continue to vigorously defend against them,” New York-based Citigroup said in a statement.

Banks including Citi, JPMorgan Chase & Co., Barclays Plc and Royal Bank of Scotland Group Plc pleaded guilty to felony charges of conspiring to manipulate the price of dollars and euros as part of a $5.8 billion settlement with the U.S. Justice Department and other regulators. UBS Group AG pleaded guilty to a related charge.

Ramchandani is not alone in going after his former bank after beating criminal charges. Former Deutsche Bank AG trader Matthew Connolly on Thursday sued the bank for malicious prosecution after an appeals court in January threw out his conviction for rigging Libor submissions. Connolly claims the bank made false statements to US investigators and left out important information to get him charged and to protect his superiors.

Ramchandani and two other traders were found not guilty after a trial in 2018 on charges they used an online chatroom named “The Cartel” to fix prices between 2007 and 2013 in what was a $5 trillion-a-day foreign-exchange market. Ramchandani, along with Richard Usher, a former JPMorgan trader, and Chris Ashton, the former head of FX spot-trading at Barclays, had all faced as many as 10 years in prison.

Prosecutors showed jurors online chats in which they claimed that the men, who were supposed to be competitors, worked to fix FX bidding to increase profits for their employers.

“It’s awesome I think we’re both helping each other out,” Ramchandani said in one Cartel chat in 2008.

In a 2012 chat, Usher told other Cartel members: “for compliance purpose no collusion going on here hahahaha.”

“It was a microscope that was placed on something that probably was happening all the time,” the jury foreman said after delivering the not-guilty verdict.

After being cleared, Ramchandani turned the microscope on his former employer, suing Citigroup for malicious prosecution. In March 2021, US District Judge Victor Marrero ruled that, under New York law, Citi could be liable if it “initiated” the prosecution by providing information it knew to be false.

Marrero also denied the bank’s request that he dismiss the case, ruling that Ramchandani had made a plausible claim that “when Citi told the DOJ that Ramchandani had engaged in wrongdoing, it knew this information was false and so acted in order to serve its interest in minimizing liability and public exposure.”

Now that both sides have exchanged evidence, Citigroup is again seeking to have the case thrown out. It argues Ramchandani can’t prove the charges against him were the result of fraud, perjury or other significant misconduct. Citi has argued that it paid Ramchandani’s legal fees and provided information for his defense, negating the idea that the bank tried to falsely incriminate him.

Ramchandani’s suit had been quietly moving toward trial before his legal team last month inadvertently disclosed secret information in the letter outlining the evidence he plans to use against the bank.

Sections of the Oct. 5 letter were intended to be redacted because they were taken from material designated as “highly confidential,” including Justice Department notes and deposition testimony, Citigroup testimony and a stipulation between Ramchandani and the Office of the Comptroller of Currency that is covered by a protective order, according to a Ramchandani court filing.

In another redacted section, Lurie said one of Citi’s lawyers admitted that the bank knew, before it pleaded guilty, that another one of its traders was being investigated for conspiring to violate antitrust laws in trades involving the South African rand and other currencies. The trader, Christopher Cummins, pleaded guilty in 2017 to a single count of conspiring to fix prices in the FX market. Still, Citi based its guilty plea only on alleged misconduct by Ramchandani, he said in the letter.

“We have adduced evidence that Citi was aware of misconduct by its personnel in other currency markets, including markets involving far more lightly traded currencies in which Citi faced grave risk of civil liability,” Lurie wrote in a passage that was redacted.

Marrero will consider whether to let the case go forward to trial, beginning as soon as the parties have filed all their legal briefs, in late February.