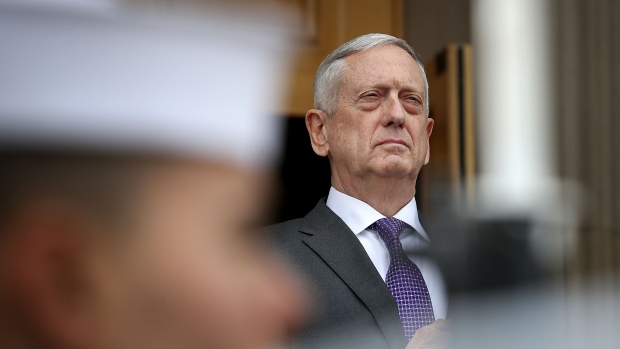 ARLINGTON, VA - FEBRUARY 01: U.S. Secretary of Defense James Mattis listens to the national anthem of the United States during an arrival ceremony with Gavin Williamson, Secretary of State for Defense, United Kingdom at the Pentagon February 1, 2018 in Arlington, Virginia. Mattis and Williamson were scheduled to meet later during their visit to discuss a range of bilateral issues. (Photo by Win McNamee/Getty Images) , Photographer: Win McNamee/Getty Images North America

Mattis, a former board member at Theranos Inc., is among several high-profile witnesses expected to be called by the government. Former Secretary of State Henry Kissinger, who was also on Theranos’s board, may testify as well.