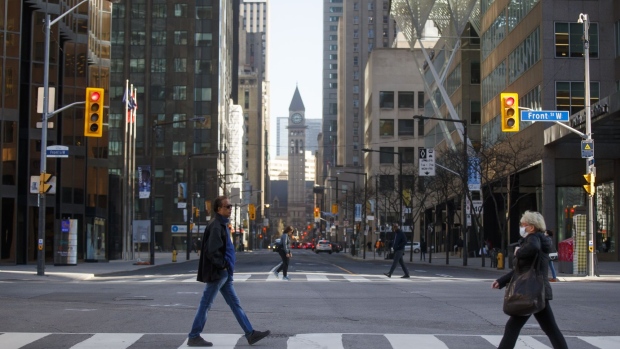 Morning commuters cross Yonge Street at Bay Street in the financial district of Toronto, Ontario, Canada, on Friday, May 22, 2020. , Bloomberg

A former managing director at one of Canada’s largest pension plans claims he is owed $65 million (US$53 million) after being fired.

Tim Patterson filed a lawsuit in Toronto on Friday, saying he and a colleague were dismissed from the Ontario Municipal Employees Retirement System in retaliation for not accepting changes to their compensation package. Eight other professionals in the private equity division resigned after receiving their bonuses, Patterson said in court documents. The allegations have not been tested in court.

Patterson’s suit says that in 2013, OMERS created a new long-term incentive plan for him and other employees in its private equity unit, which allowed them to keep 10 per cent of gains above an 8 per cent annual hurdle rate.

That compares to a 20 per cent sharing rate for workers at independent private equity firms OMERS competes with, according to the claim. The pension fund then made numerous changes to make the plan less attractive and reduce the amount paid to staff, including introducing a lifetime cap on employee earnings and later lowering this cap, Patterson alleged in court documents.

“These changes were oppressive, designed to increase OMERS’ share of the gains once the 8 per cent preferred hurdle rate was achieved by taking that share from the investment professionals,” he said.

One such change reduced employees’ share of the gains over the hurdle rate to 9.5 per cent and “drastically” lowered annual payment caps. For Patterson, this meant his annual cap was cut 20 per cent to $4 million per year, he said.

Then, last year, the plan was redrafted to require an 8 per cent return each year, loading downside risk onto the backs of private-equity employees, Patterson alleged in the court documents. He refused to sign and was fired on Jan. 14 of this year, the documents state.

Neil Hrab, a spokesperson at OMERS said that while the pension fund “is not at liberty to discuss publicly the details surrounding the departure of any employee, this wrongful dismissal claim is entirely without merit.”

“It is also OMERS’ responsibility to ensure that compensation plans are consistently applied in accordance with their documented terms rather than allowing for individual interpretations,” Hrab said. The lawsuit was first reported by the Globe and Mail.

The pension fund’s conduct toward Patterson was reprehensible, the lawsuit states. The document claims that he generated more than 60 per cent of OMERS’ private equity income over the last eight years. “It was also conduct that Omers’ pensioners would never tolerate in their own employment,” Patterson says in his lawsuit.