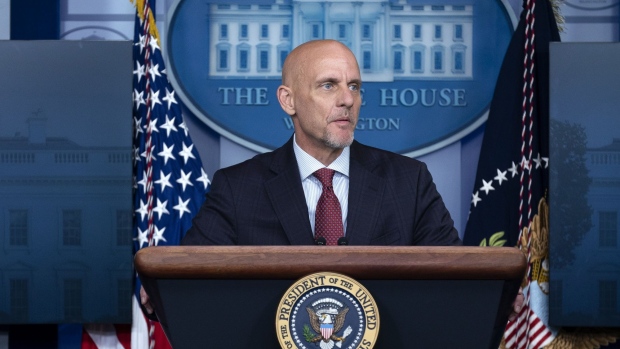 Stephen Hahn, commissioner of food and drugs at the U.S. Food and Drug Administration (FDA), speaks during a news conference in the James S. Brady Press Briefing Room at the White House in Washington D.C., U.S., on Sunday, Aug. 23, 2020. U.S. President Donald Trump said a coronavirus treatment that involves blood plasma donated by people who’ve recovered from the disease will be expanded to many more sick Americans after the FDA approved use of the therapy. , Bloomberg

(Bloomberg) -- Stephen Hahn, the former top U.S. drug regulator, will head a company aimed at helping diagnose cancer during the early stages of the disease.

The company, Harbinger Health, will use artificial intelligence and machine learning to analyze blood tests, helping doctors detect cancer early and intervene quickly, said Hahn, who was director of the U.S. Food and Drug Administration under former president Donald Trump.

A cancer doctor who was once chief medical executive of the University of Texas MD Anderson Cancer Center, Hahn ran the FDA during the first year of the pandemic, when the agency was focused on identifying and evaluating vaccines and treatments for Covid-19. In the new company, he’s zeroing in on a disease that kills more than half a million Americans each year, making it one of the nation’s most deadly illnesses.

“The opportunity to intervene in the health of patients who are diagnosed with cancer as early as possible has been a really significant unmet need that we’ve had throughout the history of oncology,” Hahn said. “So it’s a really exciting time for us and we want to capitalize on that.”

The Covid-19 pandemic had a huge impact on health care, including cancer testing: Many people delayed visits to clinics for non-Covid needs, increasing the risk that people would be diagnosed with such severe illnesses at later stages of the disease. Screening for conditions such as breast cancer fell as much as 90% in May 2020, compared with the month earlier, as Covid spread throughout the U.S., according to a study published this year.

Other companies that have blood tests for early cancer detection include Grail, which markets a test for 50 types of the disease. Sequencing giant Illumina Inc. agreed last year to purchase Grail for about $8 billion.

Flagship Pioneering Inc., which created Harbinger, has committed $50 million to the company, according to a statement. Hahn joined Flagship earlier this year as chief medical officer of its Preemptive Medicine and Health Security Initiative, and will be Harbinger’s CEO.

“We are committed to developing our platform so that there is access to early cancer detection for all individuals with a simple test,” Hahn, 61, said. “No one should be disadvantaged in the fight against cancer -- it’s our goal to bring the power of this platform not only to those with access to the top cancer centers -- but to everyone.”