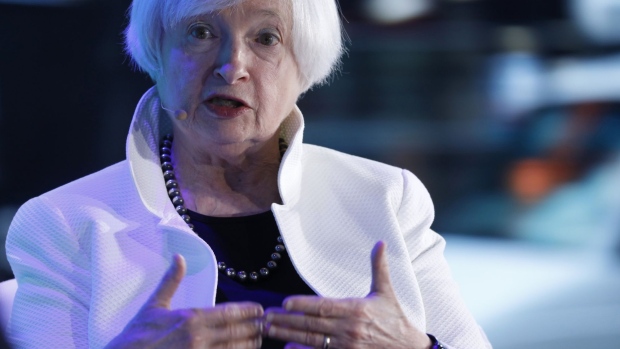 Janet Yellen, former chair of the U.S. Federal Reserve, speaks during a panel discussion at the Bloomberg New Economy Forum in Singapore, on Wednesday, Nov. 7, 2018. The New Economy Forum, organized by Bloomberg Media Group, a division of Bloomberg LP, aims to bring together leaders from public and private sectors to find solutions to the world's greatest challenges. Photographer: Justin Chin/Bloomberg , Steve Matthews

(Bloomberg) -- The U.S. needs to provide further aid to unemployed workers and to state and local governments to support the recovery amid the virus-induced slump, former Federal Reserve Chair Janet Yellen said.

“While the pandemic is still seriously affecting the economy, we need to continue extraordinary fiscal support,” Yellen said in a Bloomberg TV interview with Tom Keene and Lisa Abramowicz. “We need support for the economy from both monetary and fiscal policy. Monetary policy has already done a huge amount.”

Yellen, a Democrat, said she has briefed former Vice President Joe Biden and his running mate, Senator Kamala Harris, on her economic views but was not involved in the Biden campaign. She declined to comment on whether she could take a position in a new administration if Biden defeats President Donald Trump.

While Congress has enacted more than $3 trillion in aid, Yellen said, “Fiscal support has now lapsed.” Workers saved some of their extra benefits, but “this is running out. State and local governments also face huge budget shortfalls.”

Yellen said policy makers will also need to suppress the pandemic to get the economy back on track through testing, contact tracing, and isolation of those who are infected.

“We need a much more effective effort than we have had,” she said. “If we have that it will be good not only for health, but being able to open the economy, and we have seen that in countries ranging from Germany to Korea to China that have been successful.”

Yellen said it’s likely fiscal policy will become more important, relative to monetary policy, even after the pandemic ends as countries around the world grapple with near-zero interest rates and slow growth.

“Now we are faced with a world characterized by secular stagnation,” she said. “There is too much saving in the global economy, especially among developed countries” and that has been “depriving monetary policy of a lot of the ability it had to address economic weakness.”