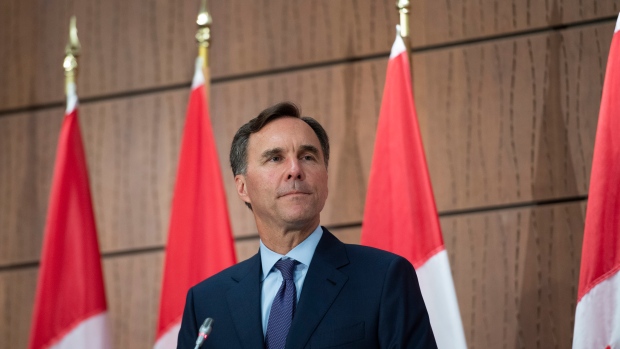 OTTAWA - Canada's election watchdog says former finance minister Bill Morneau broke the law when he promoted Liberal candidates at events he attended while in charge of the finance portfolio.

The commissioner of Canada elections says before the 2019 federal election, Morneau pumped up two prospective Liberal candidates who were attending separate events he headlined as finance minister.

“Introducing and promoting prospective (Liberal Party of Canada) candidates at the events, promoted the LPC's electoral prospects in these electoral districts,” commissioner Yves Cote wrote in his report, published Thursday.

“This caused the expenses related to these events to benefit the LPC.”

That, Cote concluded, broke a section of the Elections Act that prohibits anyone but individuals from donating to political parties: the government, which footed the bill for the events, is not an individual.

He noted also that ministers are not to use taxpayer funds for partisan gain.

One candidate who appeared with Morneau, Anita Anand, has since gone on to become the federal procurement minister.

She attended multiple events with Morneau on July 29, 2019, including a meeting at the Oakville Chamber of Commerce, where he gave a speech, and a subsequent roundtable, a tour of a clothing factory and a meeting with leaders of the Muslim community. All of the events were promoted by the Finance Department.

The commissioner said Morneau singled Anand out in his speech, remarking on her accomplishments and saying “when such a person steps forward for public life - with significant accomplishments in their private-sector life - I think it's important that we, we support them and encourage them.”

The commissioner said the comments “provided a partisan benefit to Ms. Anand and to the LPC's prospect in the electoral district of Oakville.”

A similar occurrence took place in August 2019, when Michele Fisher, the candidate for the nearby riding of Dufferin-Caledon, accompanied Morneau on a tour in the riding, and Morneau posted pictures of her on his social media accounts.

The commissioner said Morneau and his office co-operated fully with the investigation.

The costs of the events was pegged at $1,661, which Morneau's riding association has paid back. Morneau himself must also pay $300 within the next 30 days, and must also publish the notice of the violations on his social media accounts.

Morneau resigned as finance minister and an MP in August, mired in a controversy about the government's decision to award a multi-million contract to the WE organization to run a student program, and amid reports of tension between him and Prime Minister Justin Trudeau over pandemic recovery plans.

He said he never intended to run for a third term as an MP and was leaving to run for secretary-general of an international economic co-operation body.

Throughout his political career, which began with his election in 2015, Morneau repeatedly came under scrutiny for appearing to cross the lines between his role as an MP and cabinet minister and personal or partisan matters.

Among other things, he's been twice investigated by the ethics commissioner for matters related to his family human-resources business, once for selling shares ahead of an income tax increase and once for introducing pension-law changes that could have benefited the company. He was cleared both times.

The current ethics investigation is probing his ties to WE Charity in the context of the government's decision to have it run the Canada Student Service Grant program.

One of Morneau's children works for an arm of the organization, and Morneau revealed during committee hearings he took trips sponsored by WE, money that he has since paid back.