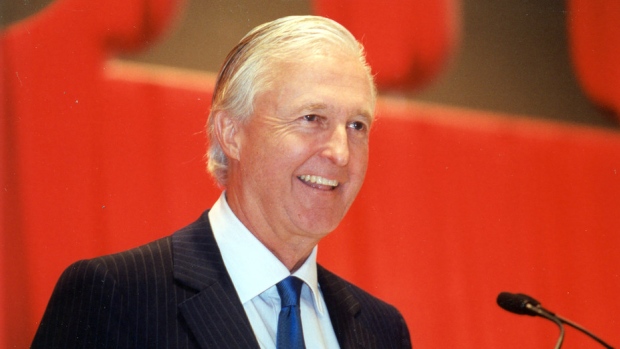 W. Galen Weston, the former chairman of George Weston Limited, has died at the age of 80.

He passed away peacefully at home on April 12 after a long illness, the family said in a news release Tuesday.

“A dutiful son, a beloved husband, a proud father, a devoted grandfather, a loving brother, W. Galen Weston dedicated his life to the service of his family, his businesses, and his community,” the news release said.

W. Galen Weston built an international business network, including food, retail and real estate companies, that made him one of the richest Canadians.

Very sorry to hear about the passing of W. Galen Weston, a true retail visionary & philanthropist. My condolences to our 26th Vice Regal, Hilary Weston, on the loss of her husband & to the entire Weston family. Galen made a huge impact on business in Canada & around the world.

Born in Buckinghamshire, England on Oct. 29, 1940, William Gordon Galen Weston was the youngest of nine children in a prominent family.

His father, Willard Garfield Weston, helped expand the family’s bakery company into a multinational food empire and served as a member of the British Parliament during the Second World War.

In 1962, W. Galen Weston graduated from the University of Western Ontario. He then moved to Ireland where he met Hilary Frayne, an Irish fashion model whom he would marry in 1966.

W. Galen Weston later returned to Canada at his father’s request in the early 1970s and took charge of Loblaw. He is credited with saving it from the brink of bankruptcy and turning it into the country’s largest grocer.

W. Galen Weston retired as chairman of George Weston Limited in 2016. Following his retirement, he continued to give back to the community through the Weston Family Foundation, the Weston Brain Institute, among other organizations, the family said.

Galen G. Weston succeeded his father as chief executive officer in 2017. He said his father’s greatest gift was “inspiring those around him to achieve more than they thought possible.”

“In our business and in his life he built a legacy of extraordinary accomplishment and joy,” he said in the news release.

Galen Weston was one of our most decent community-minded leaders. His grace, generosity, compassion and business acumen made Toronto a much better place. He will be very much missed.

In December 2020, the family announced that Galen G. Weston had succeeded his father as the controlling shareholder of Wittington Investments, Ltd., the controlling shareholder of George Weston Ltd. The announcement came on the heels of an internal reorganization in which the Weston family sold some of its shares to George Weston Ltd. and Loblaw Companies Ltd.

That sale left W. Galen Weston as controlling shareholder of bakery and real estate company George Weston Ltd., with 52.8 per cent of the outstanding shares.

Last month, George Weston Ltd. announced it is hunting for a buyer for its 139-year-old Weston Foods bakery division.

W. Galen Weston also leaves behind his daughter, Alannah Weston, who is the chairman of Selfridges Group.

“The luxury retail industry has lost a great visionary,” she said in the news release. “His energy electrified those of us who were lucky enough to work alongside him to reimagine what customer experience could be.”

W. Galen Weston and his wife were married for 55 years. Hilary M. Weston served as lieutenant-government of Ontario from 1997 to 2002.

He had a net worth of $10.7 billion, according to the Bloomberg Billionaires Index.

With files from Bloomberg News