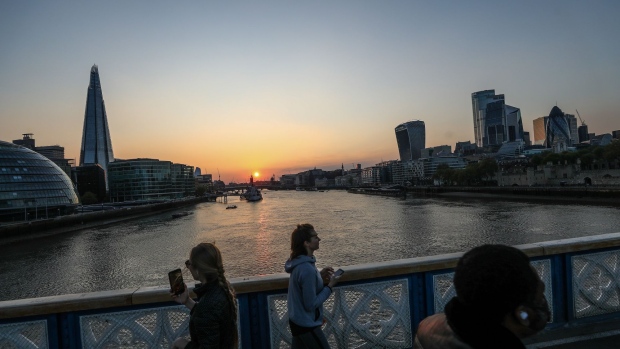 Pedestrians cross the River Thames on Tower Bridge as the sun sets in London, U.K., on Friday, April 24. , Bloomberg

(Bloomberg) -- Pierre de Chillaz, a former partner at GoldenTree Asset Management, is preparing to start his own hedge fund, joining a growing list of startups as investors return to the industry.

The money manager, who is setting up Eicos Investment Group in London, met with investors this week to raise capital, according to an investor document seen by Bloomberg. The long-biased fund will bet on European credit markets and start trading in the first quarter of next year. It’s not clear how much Eicos will raise at this stage.

Eicos joins peers such as former York Capital Management money managers Christophe Aurand, Jack Land and Akbar Rafiq in wooing investors for hedge fund startups. He faces a resurgence of interest as launches exceed closures once again and investors poured more than $33 billion into the industry during the first half of the year, according to Preqin data.

De Chillaz was a senior portfolio manager and head of European investments at GoldenTree, a $46 billion credit-focused asset manager. He is joined at Eicos by Erwan de Lepinay, a former partner and portfolio manager at GoldenTree as well as ex-colleague Askan Densteadt, who will be fund’s chief executive officer, according to the investor document.