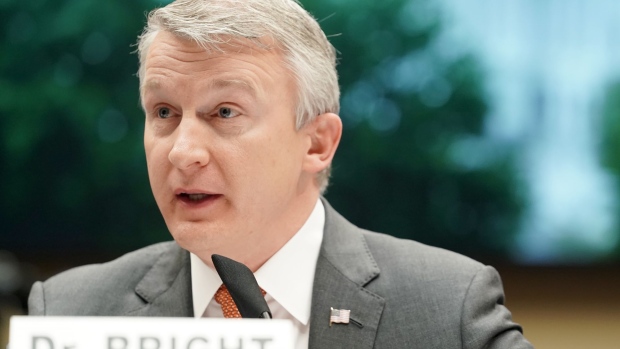 (Bloomberg) -- Rick Bright, a former US health official who condemned the Trump administration’s Covid-19 response, is leaving a Rockefeller Foundation pandemic prevention effort just over a year and a half after being tapped to lead it.

Bright will depart from the foundation’s Pandemic Prevention Institute, according to a spokesperson for the New York-based philanthropy. The effort itself, once intended to be spun off as an independent entity, will be subsumed by the foundation.

The Rockefeller Foundation selected Bright to lead its newly minted institute in March 2021, pledging millions of dollars toward Covid data collection and surveillance efforts through global partnerships with various public and private entities, including the US Centers for Disease Control and Prevention. Named to head the effort after the public tussle with the Trump administration, Bright said then that he saw the project becoming a global early warning system for pandemics.

When Bright was brought on “the world was, as you know, in a very different place in this space,” Davina Dukuly, a spokesperson for Rockefeller, said late Monday. The foundation “remains committed to ensuring the world has the capacity to prevent future pandemics.”

Bright served as deputy director of the US Health and Human Services Department’s Biomedical Advanced Research and Development Authority, which oversees the development of medical tools to combat health emergencies. After being reassigned from that post in April 2020 during the early months of the pandemic, Bright filed a whistleblower suit alleging that he had been removed for speaking out against the Trump administration, specifically about its support for hydroxychloroquine as a Covid drug. Former President Donald Trump had touted the medication despite a lack of evidence that it benefited Covid patients.

Now close to three years since the coronavirus was first detected, the pandemic has spurred governments, universities and trade organizations in the US and beyond to create groups such as the Global Pandemic Prevention and Biodefense Center, the University of Oxford’s Pandemic Sciences Institute, the New York City Pandemic Response Institute and the Medical Countermeasures Coalition.

Support for Covid responses has begun to dry up, and Congress has denied the Biden administration funds for new purchases of vaccines and therapies. The PPI’s operations will be moved in-house as part of the foundation’s work in the development of its “broader climate and health strategy,” Dukuly said. There are 18 staff members listed on PPI’s staff webpage.

Ashley Chang, another spokesperson for Rockefeller, said Tuesday that this is not a cost-cutting venture for the foundation and that they have no plans to lay PPI employees off. They plan to continue investing in pandemic prevention, but directly through the foundation versus first channeling it through PPI.

“We are actively in the pandemic prevention business, we’re in it by working with our grantees and partners in a way that really leverages all of the foundation’s tools going forward,” Chang said.

A video posted on the Rockefeller Foundation website describes the Pandemic Prevention Institute’s aims for creating an early warning system, with few specifics on operations. The institute will “use the most advanced tools” including “machine learning and data science” to interpret pandemic-related signals, according to the video.

“When it comes to outbreaks, there are usually signals of an emerging threat,” its narrator says over a pulsating soundtrack. “Linking different data types, interpreting those indicators with the latest technology and sharing the earliest signals that something might be wrong. This is the mission” of the institute.

“We can see the signal, speed the response, stop outbreaks. The Pandemic Prevention Institute will make it possible,” the video concludes.

In a blog post from November 2021, Bright wrote that “an early warning system that works for all is possible, but only if we work together and only if we do so urgently.” He noted that the PPI had established relationships with genomic surveillance researchers in the US Africa, Europe and India, and was working with the UK’s Wellcome Trust to develop “a technology layer” to help combine disparate types of data.

In July, the PPI announced an agreement with the Pasteur Network aimed at improving epidemiological and genomic surveillance in low- and middle-income countries and enhancing discovery of emerging pathogens.