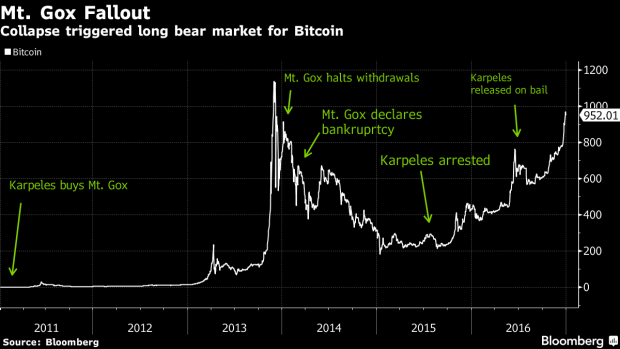 (Bloomberg) -- Mark Karpeles, a central figure in the early days of Bitcoin who presided over the dramatic 2014 collapse of the world’s biggest cryptocurrency exchange, was found guilty of tampering with records and given a suspended prison sentence.

The Tokyo District Court cleared the former Mt. Gox chief executive officer of embezzlement charges. Karpeles, who wore a dark suit and bowed to the judge in court on Friday, wasn’t on trial for the mysterious disappearance of Bitcoins that led to Mt. Gox’s implosion.

The verdict caps a remarkable rise and fall for the 33-year-old Frenchman, who bought Mt. Gox in 2011 and turned it into the world’s dominant venue for buying and selling virtual currencies. The Tokyo-based platform’s closure cast a long shadow over the market, triggering a more than two-year slump in cryptocurrency prices and undermining faith in the exchanges that serve as gatekeepers in an industry that often operates with little to no regulation.

Even after the digital asset boom of 2017, Mt. Gox’s legacy has continued to weigh on investor sentiment. Last year’s tumble in Bitcoin was partly blamed on the trustee overseeing Mt. Gox’s remaining holdings, who has offloaded about 60,000 Bitcoins and plans to distribute the rest to investors who were affected by the exchange’s closure -- a process that’s unaffected by the Karpeles case. The worry is that some of those investors will turn around and sell, further weighing on prices.

Mt. Gox filed for bankruptcy protection in 2014 after disclosing that it lost 850,000 Bitcoins, then worth about $500 million. Karpeles later recovered about a fourth of the total, raising questions about the circumstances of the loss and the accuracy of his statements.

Karpeles, once dubbed the Baron of Bitcoin, has denied involvement in the coins’ disappearance, apologizing that it happened under his watch but saying he wasn’t responsible. He has said he initially cooperated with Tokyo police, but stopped after realizing they suspected him of taking the coins. Investigators eventually arrested him for allegedly falsifying records. He was later released on bail.

Since his trial began in July 2017, Karpeles has professed innocence. As recently as last week, he said those expecting him to go to jail would be disappointed. “I’m not going to prison,” he wrote in a March 8 post on Reddit.

The Karpeles case has attracted increased public interest since the shock arrest in Japan four months ago of another prominent foreign executive: Carlos Ghosn, the former chairman of Nissan Motor Co. The Brazilian-born French national was charged with hiding millions of dollars in deferred income from his fellow executives and board members.

Karpeles has complained about unfair treatment by Japan’s justice system, which has a 99 percent conviction rate. In interviews with various media, Karpeles has said he was interrogated for months without a lawyer and bullied into signing a confession, a "nightmare" process during which he lost 77 pounds over 11 months.

To contact the reporter on this story: Yuki Furukawa in Tokyo at yfurukawa13@bloomberg.net

To contact the editors responsible for this story: Edwin Chan at echan273@bloomberg.net, Michael Patterson, Sam Mamudi