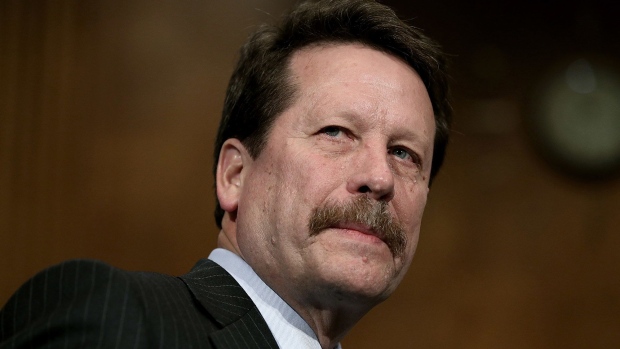 (Bloomberg) -- Robert Califf, who ran the U.S. Food and Drug Administration under President Barack Obama, has moved into top contention to lead the agency again, according to people familiar with the matter.

While a decision isn’t final, Califf is now the front-runner, said the people, who asked not to be identified because nothing has been announced. Califf, who is currently head of strategy and policy at Alphabet Inc., would replace acting FDA Commissioner Janet Woodcock if he is confirmed by the Senate.

Without a nominee, Woodcock wouldn’t be eligible to serve as acting commissioner beyond mid-November, but can keep serving if a nominee is in place by then.

The FDA has been without a permanent leader since the start of the Biden administration, even as the agency has made a series of highly consequential decisions related to the U.S. pandemic response. This week, an advisory panel is weighing whether to back booster shots for people who received the Moderna Inc. and Johnson & Johnson Covid-19 vaccines, just weeks after the FDA authorized a similar supplemental dose for people who got the Pfizer Inc.-BioNTech SE shot.

Gaining clearance for booster doses has been a priority for the White House ever since the country was gripped by a delta-variant-fueled wave of new infections over the summer. Amid concern that the protection afforded by the authorized vaccines could wane, Biden vowed to make boosters available -- a promise that some observers said got ahead of the science.

The perception that politics was playing a role in the booster-clearance process led two top FDA vaccine experts to say they would leave their posts this year. Any new commissioner will likely need to address similar concerns among rank-and-file agency employees.

Controversy has dogged the FDA on other fronts. The approval earlier this year of Biogen Inc.’s Alzheimer’s disease drug Aduhelm over the objections of agency advisers has drawn the scrutiny of lawmakers, as well as an HHS inspector general probe into contacts between the company and FDA employees.

The long wait for a permanent commissioner to be named has perplexed some agency watchers.

“This has been the most secretive process that we’ve ever seen, and also in a sense the most puzzling, since FDA has been in the forefront of the news the whole year and they haven’t named anybody to such an important position,” said Wayne Pines, a former associate commissioner of the FDA.