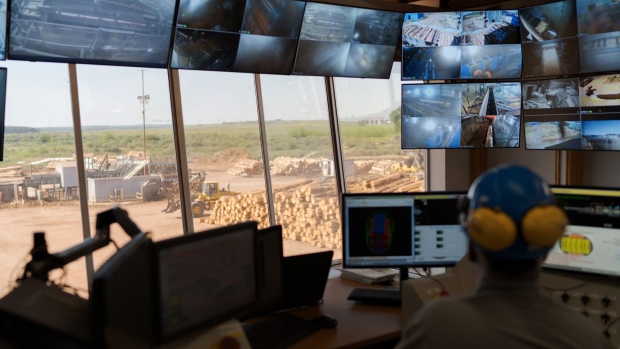 (Bloomberg) -- For much of his life, Mark Crandall was Mr. Oil.

In the 1980s, he helped start the oil desk at Morgan Stanley. Then he moved to Glencore, back when it was run by Marc Rich, where Crandall went from energy trader to running the department. In 1993, he left to take on his biggest project: co-founding commodity giant Trafigura Group, now the world’s second-largest independent oil trader.

His current big investment? A lumber mill in a corner of northern Uruguay that he says can be part of the global fight against climate change.

For someone who made his “first fortune” in fossil fuels, it’s part of a pivot into the world of green finance that would have surprised even Crandall during his oil trading days.

“I always joke with people that I’m trying to get to heaven despite past misdeeds,” he said.

“The reality is a little more complex,” Crandall said in a video interview from Edinburgh, where he recently stayed while making the hour-long commute to Glasgow to attend the COP26 climate summit. “I certainly never worried about petroleum hurting anybody.”

Crandall retired from oil trading about 15 years ago. At the time, he was, as he puts it, “moderately rich.” But many people assumed he had lots of money and pitched him on renewable energy and other emerging green investments.

“At the beginning, I was trying to make money,” said Crandall, who started the sustainability-focused private equity firm PostScriptum Ventures in 2006 and estimates his current net worth at less than $100 million.

“There weren’t many other people doing it,” he said. “I walked into the niche. Then over time, as evidence accumulated of the impact of global warming, I realized there was a strong ethical element to this.”

His current bid to make money (while appreciating the ethics) is a partnership into a Latin American lumber venture — a project first mentioned to him by a man Crandall hired to renovate his home with updates like installing a bocce ball court.

It was the kind of fortuitous encounter that could only happen in a place like Punta del Este, the Uruguayan resort that’s sometimes called the Monaco of South America. Famous for its sculpture of a giant hand emerging from the sand, the beach town’s shimmering waters and glamorous parties draw in elites like Mark Zuckerberg and Ralph Lauren. Crandall had spent time in the city since his days as an oil trader, discussing deals during some of the region’s famed barbecues, known as asados, before buying a home there in 2019.

That’s when he met Matias Abergo.

The consummate entrepreneur, Abergo founded a video surveillance company and imported home-theater equipment before starting construction company Enkel Group in 2016. Enkel was a brick-and-mortar builder, like the renovation Abergo oversaw on Crandall’s home. But Abergo had already set his sights on his next idea: mass timber.

Read More: Skyscrapers Made of Wood Make a Return, Nudged by Google

“I try to be disruptive and innovative — finding niche markets that no one was attacking and that were having success stories in other parts of the world,” said Abergo, who first got hooked into mass timber after watching a TED talk by Canadian architect Michael Green.

Proponents say mass timber has the potential to substitute a lot of the carbon-intensive steel and concrete that goes into high-rises. Buildings and the construction sector contributed almost 40% of global energy-related carbon emissions in 2019, according to United Nations estimates. Sustainable forestry can also be seen as a form of sequestration of carbon, which is otherwise released when a tree falls and decomposes.

Read More: Why We Just Might Want to Build Skyscrapers Out of Wood

While the idea of mass timber has been kicking around for years, increasing pressure on developers to reduce their carbon footprint may finally help propel the market. The Economist Intelligence Unit estimates that demand for cross-laminated timber, one of the most widely used mass timber products, will grow more than 13% a year through the mid-2020s. By 2025, mass timber is expected to account for about $1.4 billion of the $14 trillion global construction industry.

Norway boasts the world’s tallest wood building at 18 stories, soon to be displaced by a 25-story mass-timber tower in Milwaukee next year. Vienna has built an entire district out of the stuff. In the U.S., the number of mass-timber buildings completed or under construction soared more than seven-fold in just three years to 576 at the end of September. Another 665 are in the design phase, according to data compiled by the Softwood Lumber Board.

Not everyone is sold on mass timber. There are concerns about its resistance to moisture and fire. And critics say its environmental benefits are overstated due to the carbon that’s released from the decay of branches and tree tops left in the forest after the wood is cut, and also through the burning of waste products like sawdust. That carbon footprint swells even more when considering wood’s shorter lifespan and greater vulnerability to natural disasters than concrete buildings, said Beverly Law, a carbon-cycle scientist and emeritus professor at Oregon State University.

“The reason you might see it catching on more is because it’s being marketed heavily by the timber industry in the U.S.,” Law said.

Abergo hooked Crandall into the world of mass timber slowly, and then all at once.

By the time the men met, Abergo had already built a three-story hotel with mass timber imported from Italy.

But Abergo wanted to use his country’s vast forest resources to start making the material at home. He and Crandall recall countless evenings spent in conversation about the potential for mass timber.

“He spent hours and hours explaining it to me, and the more he explained, the better I understood it,” Crandall said. “He didn’t pitch it to me. I don’t think there was ever a point in his own head that he thought he was going to persuade me to invest in mass timber.”

But of course, Abergo did.

Abergo and Crandall partnered in early 2020 to develop a mass timber project that led them to start negotiations later that year with the Chilean owners of a lumber mill in northern Uruguay. The two men led a group of investors, which paid more than $25 million, including debt assumption. The deal closed in 2021.

Now the investor group is pouring millions more into the mill — one of the top 10 in South America by capacity — to turn it into Uruguay’s first mass timber factory.  The new company is called Arboreal.

Uruguay is ideal for intensive forestry thanks to its relatively flat geography and little in the way of native forests. In recent decades, investors have planted eucalyptus and pine on more than 1 million hectares (2.47 million acres) that was generally unsuitable for food crops. But much of that wood gets shipped as logs to China and India, where they’re used to make furniture and pallets.

On a recent hot afternoon in the Uruguayan spring, Abergo drove his Volvo hybrid sedan to visit a tree farm where piles of recently cut pine logs, some almost 2 feet in diameter, were methodically loaded by a massive tractor-mounted claw onto a truck. They were set to be hauled 250 miles away to the port of Montevideo, and then get shipped overseas.

“I want to cry when I see those logs,” Abergo said, bemoaning the lost opportunity to turn them into construction lumber.

The cash that Abergo, Crandall and the other investors are flushing into Arboreal will allow the company to more than double its annual production to about 260,000 cubic meters by early 2022 and automate its lumber-classification system.

The second, more ambitious project, is to transform a current lumber warehouse that takes up about 91,500-square-feet into a new $22 million mass timber factory. Abergo predicts the plant will be up and running before the end of 2022. Production is expected to reach peak annual capacity of 50,000 cubic meters in 2024.

Local builders — including Enkel Group, where Abergo still serves as chief executive officer — will probably buy about 60% of that wood, with the rest shipped abroad, he said. Enkel expects to break ground next year on a mass timber casino. Abergo’s also working on contracts for housing developments.

Abergo drives more than 1,200 miles a week in a country about the size of Missouri, visiting the mill and pitching the virtues of wood construction to authorities and prospective clients. Uruguayans still view wood as a flimsy building material good for little more than rustic beach houses and shantytown dwellings. Abergo thinks the quality of locally produced mass timber and cost savings of 25% compared with traditional construction will eventually win over his compatriots.

“In terms of construction times, we are at least three times faster,” he said.

Meanwhile, Crandall says that for mass timber to ultimately make a difference when it comes to climate goals, it will end up coming down to one thing: making money. Mass timber needs to be such “a persuasive offering” that it fuels construction and pushes tree prices up, he said.

“So that a guy with a piece of land naturally thinks he’s going to make the most money if he plants a tree.”