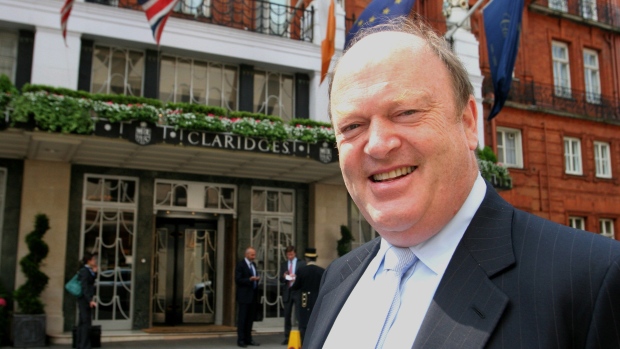 (Bloomberg) -- Derek Quinlan, the Irishman who rose from being a tax official to the financier behind successful bids for Citigroup Inc.’s tower in Canary Wharf and Banco Santander SA’s global headquarters, filed for bankruptcy in London.

The businessman blamed the decision on his failure to reach agreement with Ireland’s bad bank, the National Asset Management Agency, about his loans that were taken into the organization as part of a bailout of the country’s lenders in 2009. NAMA appointed a receiver to a number of his properties in 2011 after Quinlan failed to agree a repayment plan for some of his loans.

The dispute has prevented him from restarting his career, he said, claiming that NAMA rejected his efforts to settle with him. The businessman said he has repaid €3.1 billion ($3.21 billion) in “personal and associated debt” to the bad bank.

“This repayment amount represents hundreds of millions of profit to NAMA on my debt that they purchased at a significant discount,” Quinlan said Wednesday. He accused the bad bank of selling London real estate at the wrong time after it was established, when the assets could have been sold with a surplus if the organization had waited.

Quinlan’s Quinlan Private business spent billions of euros on real estate, often at record prices, during Ireland’s Celtic Tiger period as the country’s property boom created huge profits for leading business people. Among the assets it acquired were the Maybourne Hotel Group in London, which includes Claridge’s, as well as The Savoy Group and a site in Dublin’s south docks that subsequently lost about 90% of its value when the market crashed.

Quinlan said he is not acceding to a separate bankruptcy petition taken against him by a fund linked to businessman Robert Tchenguiz in relation to a personal debt of around €75 million linked to the Banco Santander headquarters. Quinlan said he is unable to pay the legal costs required to defend the case.

--With assistance from Lucca de Paoli.