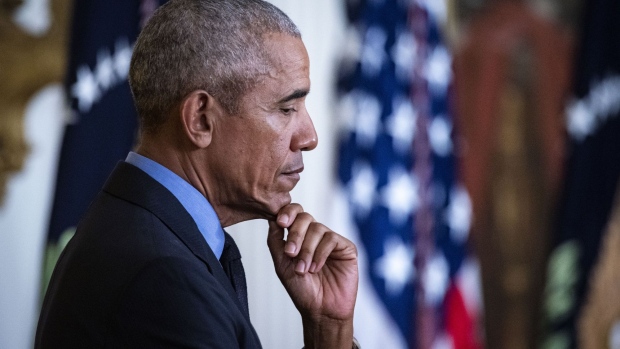 Former U.S. President Barack Obama listens as U.S. President Joe Biden, not pictured, speaks about the Affordable Care Act and lowering health care costs for families during an event in the East Room of the White House in Washington, D.C., U.S., on Tuesday, April 5, 2022. Biden announced additional actions to save families hundreds of dollars a month on their health care. , Bloomberg

(Bloomberg) -- The use of genomics hasn’t yet reached its full potential, a frustration former President Barack Obama blames on the lumbering US health-care system.

When the first sketches of the human genome were published in the early 2000s, scientists were hopeful they would usher in a new era of medicine. The cost of reading a person’s whole genome, or all their genetic information, has plummeted from about $100 million a person to less than $1,000. But genome sequencing hasn’t yet made it into the mainstream, something that frustrates Obama, who said he became deeply interested in the burgeoning field when he was president.

“I’ve been frustrated by the fact that we’re still not maximizing even the data we currently have,” Obama said Wednesday at a conference hosted by Illumina Inc., the main company that makes machines that can read DNA.

Obama blames the slow progress on the US health-care system, with incentives that aren’t always straightforward and reward clinicians for providing “disease care” rather than health care.

“To the extent progress has been slower than I would’ve hoped has less to do with the particulars of precision medicine but has more to do with the fact we still have a big, creaky health-care system that accounts for one-sixth of the US economy,” Obama said.

A non-employer based, single-payer health-care system offers a “smarter” approach than the sprawling US system, he said. One unified body makes reform much easier than having to contend with so many players and “power dispersed everywhere.”

Creating bigger datasets would allow scientists to make more connections between different genetic sequences and diseases, plus it would drive down costs even further because of the scale, he said.