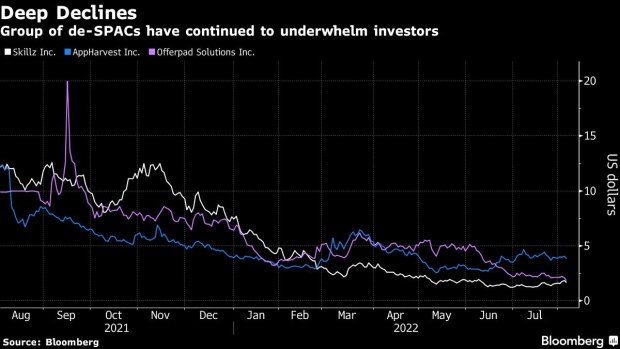 (Bloomberg) -- As the earnings season wraps up there’s a pocket of the market where results have been particularly lackluster -- companies that went public through a SPAC merger during the height of the blank-check craze.

Disappointing earnings this week from companies ranging from a mobile gaming platform that’s a former darling of Cathie Wood’s Ark Invest to an indoor farming firm with home decor guru Martha Stewart on its board hit the already battered group.

With more than two-thirds of the benchmark S&P 500 Index components reporting results so far, fewer are topping Wall Street expectations as the market battles a choppy economic outlook. Stocks from blank-check deals are faring worse. The De-SPAC Index, a basket of stocks from companies that have completed their tie-ups, has fallen 67% in the past year. More than 85 of the roughly 385 former SPACs trade below the $2 mark, data compiled by Bloomberg show.

“Earnings season has not been kind to de-SPACs as a global economic slowdown is raising the risk that many will be forced into liquidation,” said Ed Moya, senior market analyst at Oanda Corp. “A global recession is making it harder for these de-SPAC companies to provide a clear pathway to profitability.”

Special-purpose acquisition companies were heralded as a way to help companies get a public listing with fewer restrictions on financial projections compared with a traditional initial public offering. But many companies that merged through a SPAC have struggled to meet forecasts they made before combining, sending share prices plummeting and drawing attention from securities regulators.

Some companies that reported results this week were former SPACs with business models that have drawn skeptics. The worst performers were hit by losses of more than 10% after earnings, adding to declines that have wiped out as much as 91% of their value since going public.

Below are some highlights of post-SPAC companies that provided lackluster updates:

There have been some bright spots: