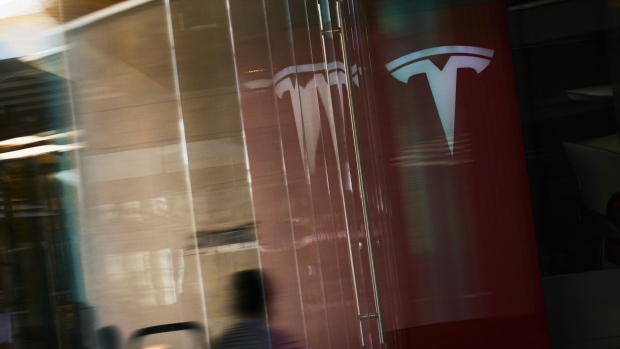 Tesla Inc. signage outside a dealership at the Easton Town Center shopping mall in Columbus, Ohio, U.S., on Friday, Dec. 10, 2021. Prices for popular shopping categories are rising the fastest in decades, putting political and public pressure on the Federal Reserve to curb inflation, not to mention potentially crimping outlays as Americans finish off their holiday shopping list. , Bloomberg

(Bloomberg) -- A former Tesla Inc. engineer said it was “humiliating” to be sued in open court for allegedly stealing trade secrets, only to be steered by the company into closed-door arbitration where he can’t defend himself publicly.

But a federal judge said Thursday that’s how it has to be for Alexander Yatskov, who’s fighting allegations he stole sensitive proprietary information about Tesla’s supercomputer technology after a brief stint working for the electric automaker this year.

“I think you’re on your way to arbitration,” US District Judge James Donato said at a San Francisco hearing. “I’d love to keep it, I’m just not really seeing a way.”

The case highlights two recurring patterns at Tesla: Aggressive action toward ex-employees suspected of betraying the company and a strong preference for waging workplace disputes out of the public eye.

The world’s most valuable automaker has been accused in the past of using arbitration proceedings to minimize attention on embarrassing allegations about racial discrimination and sex harassment at its main California factory.

In this case, Tesla went on the offensive in a May 6 complaint alleging that Yatskov downloaded “extremely valuable” trade secrets about its supercomputer on his personal device and tried to cover up the theft before he left the company.

“We’re not saying for sure, Dojo will succeed,” Musk said. “We think it will.”

Yatskov’s lawyers argued that the company’s move to toggle back and forth between court and arbitration is procedurally improper and that Tesla “cannot have it both ways.”

“Now that Tesla has dragged Dr. Yatskov’s name through the mud, Tesla wants to hide this dispute in private arbitration,” his lawyers said in a filing.

But Donato said Tesla appears to be appropriately exercising the mandatory arbitration provision of Yatskov’s contract with the company.

He also urged the two sides to seek a settlement.

“At the end of the day, maybe it’s just money,” the judge said to Yatskov’s lawyer, John Kirke. “I mean, he doesn’t want his job back, does he?”

But Tesla’s lawyer, Sean Paul Gates, told Donato the company aims to recover the cost of its investigation from Yatskov, which the judge said may prove to be a roadblock to a settlement.

Kirke said afterward he was disappointed with Donato’s decision to send the case to arbitration.

“We will continue to do everything we can in public to clear Dr. Yatskov’s name,” the lawyer said, adding that he was encouraged by the judge’s assumption that Tesla should resolve the case by paying his client.