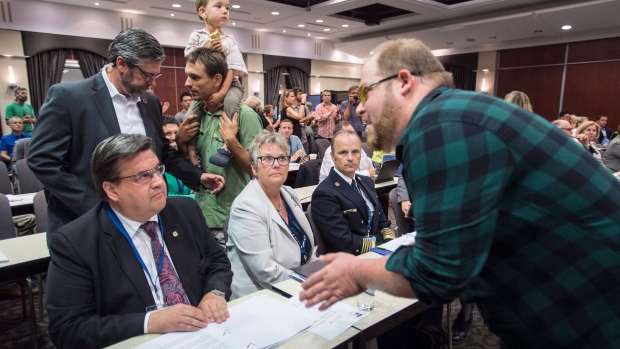 BANFF, Alta. -- Delays caused by the replacement of a panel reviewing the Energy East Pipeline project show that Canada's regulatory system is flawed and must be fixed, says a former CEO of proponent TransCanada.

Hal Kvisle said Thursday the recusal of a National Energy Board panel in early September just after hearings on the controversial project began was a victory for activists whose only objective is to block the process.

"It's regrettable. I've been making the point to the government of Canada for about 12 or 13 years there needs to be significant improvements in the regulatory process and here we're just had it thrown in the ditch again by people whose objective is really just to stop the whole thing."

The NEB's review broke down after hearings in Montreal were disrupted by protesters. Critics charged the panel was biased after learning that two of three panellists met last year with former Quebec premier Jean Charest, then a consultant for TransCanada (TRP.TO).

Kvisle, who spoke on the sidelines of the Global Business Forum in Banff, Alta., says the controversy was a "tempest in a teapot," pointing out the panellists also met with other interested parties. He retired from the top job at TransCanada in 2010.

Natural Resources Minister Jim Carr has said new panellists will be appointed as soon as possible but the review period could be delayed, as could the NEB's goal of having a decision on

Energy East by March 18, 2018. The new panel is to decide how the review will proceed and whether evidence will need to be heard again.

The 4,500-kilometre pipeline would cost $15.7 billion and carry 1.1 million barrels of oil per day from Alberta to New Brunswick. About two-thirds is already in place as a natural gas pipeline.

"It signals one thing: The federal government is prepared to make some difficult decisions and I think they've made one on that file," said Anderson in an interview at the Banff conference.

The liquefied natural gas project would include the construction of an $11-billion export terminal in northern B.C., expected to produce about 19.2 million tonnes of LNG per year at full capacity. Its proponents have not yet approved its construction.