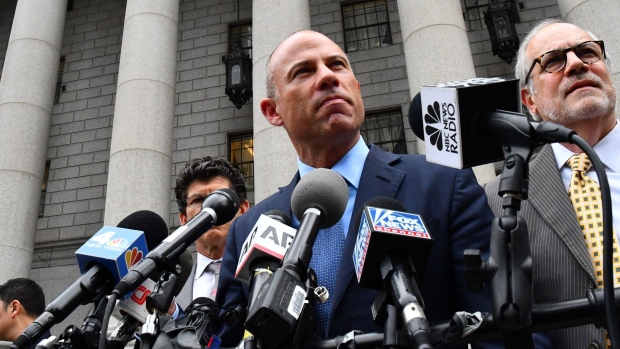 Michael Avenatti, attorney and founding partner of Eagan Avenatti LP, speaks with members of the media while exiting from federal court in New York, U.S., on Tuesday, May 28, 2019. Avenatti pleaded not guilty to charges that he misappropriated thousands of dollars from his most famous client, adult-film star Stormy Daniels, as the embattled attorney's legal troubles pile up from coast to coast. Avenatti was arrested in New York in March and charged with extorting millions of dollars from Nike Inc. , Photographer: Louis Lanzano/Bloomberg

A judge in federal court in Santa Ana, California, handed down the sentence Monday, the Justice Department said in a statement. Avenatti, 51, was also ordered to pay nearly $11 million in restitution to four clients as well as the Internal Revenue Service.

Avenatti “has done great evil for which he must answer,” US District Judge James V. Selna said, according to the Justice Department statement. He ordered the former lawyer to serve the sentence consecutively with his previous prison terms. That means Avenatti, who began serving his sentences in February, could spend nearly 20 years behind bars.

“The sentence imposed today on Mr. Avenatti was unreasonable and ‘off the charts’ harsh,” his lawyer Dean Steward said in an email. “The prosecution acted vindictively throughout the case, ending in this flatly unfair sentence.”

The list of victims in Avenatti’s final criminal case included a paraplegic with mental health problems. The California-based lawyer also obstructed the IRS’s efforts to collect more than $3 million in payroll taxes from a coffee business he owned. The case went to trial in 2021, but was cut short when the judge declared a mistrial. Avenatti pleaded guilty in June.

And in 2020, a jury found Avenatti guilty of trying to extort $25 million from Nike Inc. during settlement talks on behalf of another client. He was sentenced in July 2021 to a 2 1/2-year prison term in that case.