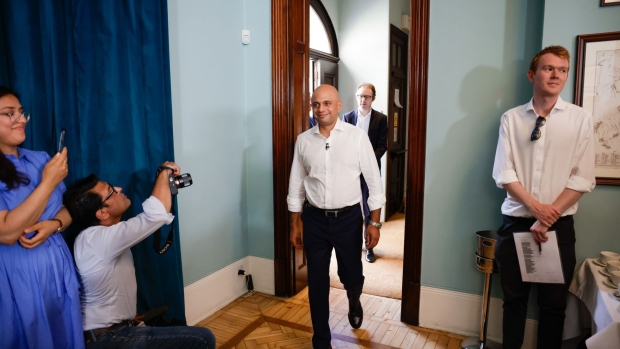 Sajid Javid, former UK health secretary, at the launch of his campaign for the leadership of the Conservative party in London, UK, on Monday, July 11, 2022. UK Prime Minister Boris Johnson quit as Conservative leader last Thursday after a dramatic mass revolt from his ministers, following a series of scandals that have overshadowed his three-year premiership. , Bloomberg

(Bloomberg) -- Former UK Chancellor of the Exchequer Sajid Javid will stand down as a member of Parliament at the next general election.

Javid told Bloomberg he had reflected on his future over recent days and had decided to quit politics, making him the latest high-profile Conservative MP to announce their intention to leave Parliament.

Javid, once considered one of the party’s brightest prospects, also served as health secretary during the Covid pandemic, and has also been home secretary.

Some 10 Tory MPs have now announced their intention to leave politics at the next election, which is due by January 2025 at the latest.