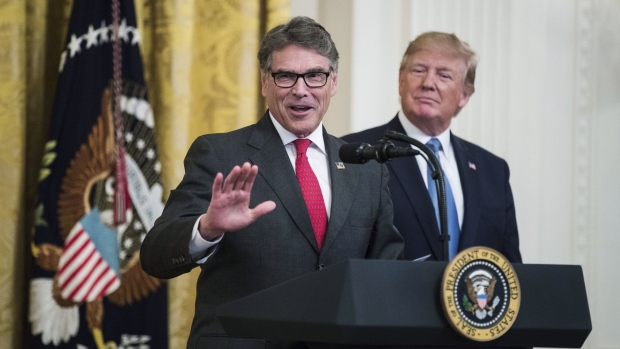 Rick Perry, U.S. secretary of energy, delivers remarks on "America's environmental leadership" during an event with U.S. President Donald Trump in the East Room of the White House in Washington, D.C., U.S., on Monday, July 8, 2019. Trump boasted that the U.S. is ranked No. 1 for access to clean drinking water as he emphasized American environmental gains despite seeking to roll back rules meant to preserve them. Photographer: Sarah Silbiger/Bloomberg , Bloomberg

(Bloomberg) -- House Democrats are moving forward with the impeachment investigation of President Donald Trump over his interactions with Ukraine, as Energy Secretary Rick Perry became the latest official subpoenaed to provide documents.

Here are the latest developments:

The panels are still planning for Yovanovitch to testify, even though the White House has pledged not to cooperate with the investigation. Canceling another witness at the last minute would add fuel to Democrats’ threat to include obstruction of Congress as an article of impeachment.

The State Department on Tuesday blocked Gordon Sondland, U.S. ambassador to the European Union, from appearing for his scheduled deposition less than an hour before it was set to start. The committee chairmen issued a subpoena for Sondland and could do the same for Yovanovitch if she doesn’t show up.

To contact the editors responsible for this story: Joe Sobczyk at jsobczyk@bloomberg.net, Laurie Asséo, Kathleen Hunter