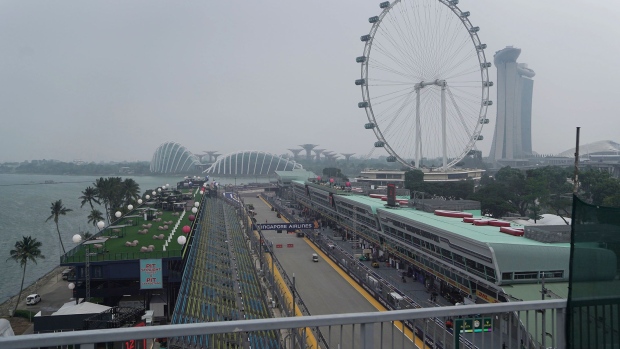 (Bloomberg) -- Formula One will go ahead with the Singapore race this weekend as the city remains partly covered in ash and smoke sweeping in from illegal burning of forests and farm land in neighboring Indonesia.

The air quality level in the city-state remained unhealthy for a second day with the National Environment Agency warning of hazy weather conditions in the next few days. But Formula One Group Executive Chairman and CEO Chase Carey said the Grand Prix event will go ahead as scheduled.

Malaysia closed 296 schools in Kuala Lumpur on Thursday, while 939 schools in Selangor state will remain shut through Friday, the state education departments said in separate statements. Authorities have closed about 2,500 schools in total, affecting almost 2 million students, as Kuala Lumpur and Kuching in Sarawak were among the world’s most polluted cities.

With the menace of haze sparking a surge in demand for masks, Malaysian authoriteis capped the price to prevent profiteering. The price of N95 masks was set at a maximum 100 ringgit ($24) a box, or 6 ringgit each, according to the domestic trade ministry.

The number of hotspots in Indonesia jumped to more than 4,000 on Thursday, sending a stinging layer of smoke and ash from illegal burning to clear land for plantations to parts of Southeast Asia. While Indonesia has stepped up efforts to douse the fires, an unusually prolonged dry spell has worsened the haze in recent weeks, causing air traffic disruptions and serious health concerns.

The country has more than tripled the number of firefighters to 29,039, drawn from the military, police and disaster mitigation agency with the help of 44 helicopters, according to the National Disaster Mitigation Agency. Authorities have named more than 200 companies and individual farmers as responsible for starting the fire.

While no estimates are available on the extent of losses from the haze this year, a total of 2.6 million hectares of land was affected in 2015, costing Indonesia $15.7 billion in economic losses.

Singapore’s pollutant standard index rose to at least 117 on Thursday according to official figures. The National Environment Agency advised residents to reduce prolonged or strenuous outdoor physical exertion, while those with chronic lung or heart disease should avoid such activities.

The total number of hotspots in Indonesia rose to 4,077 hotpots on Thursday from 2,719 on Wednesday, with Kalimantan accounting for 2,338 fires and Sumatra 684 fires. The wildfires have affected 328,724 hectares of forest and farm land this year, data from the disaster mitigation agency show.

There may be some relief over the next week as the country’s weather bureau forecasts rain in several fire-hit areas in Sumatra and Kalimantan. The disaster mitigation agency deployed two planes on Wednesday to conduct “weather modification” and managed to create rain in Dumai, Riau for 30 minutes, it said. The agency will deploy three planes for artificial rain efforts in Sumatra and Kalimantan, it said.

While wet weather is forecast to persist in the northern Southeast Asian region in the next few days, dryness may persist in the southern regions, according to Asean Specialized Meteorological Centre. Hazy conditions are likely to persist as hotspots in Sumatra and Kalimantan expected to continue, it said.

The haze continues to cause air traffic disruptions in Indonesia, with more than 160 flights from seven airports in Pontianak, Samarinda, Sampit, Banjarmasin, Tanjung Harapan and Berau in Kalimantan and Jambi in Sumatra were canceled, delayed or diverted on Wednesday because of reduced visibility, according to AirNav.

Three Firefly Airlines flights from Subang airport in Malaysia to Seletar airport in Singapore have been canceled on Thursday as the haze reduced visibility in Seletar, according to Malaysia Airports.

Environment ministers from Malaysia and Indonesia have traded blame on the haze situation with Kuala Lumpur offering help to put out the forest fires. Malaysian ruling party leader Anwar Ibrahim, who’s widely expected to be the country’s next prime minister, said companies must be held responsible for costs of haze. He said the menace was an ecological warfare and Malaysia must feel outraged about it.

Malaysian Prime Minister Mahathir Mohamad may pass a law to hold Malaysian companies responsible if they don’t put out fires on their properties outside the country.

To contact the reporter on this story: Yoga Rusmana in Jakarta at yrusmana@bloomberg.net

To contact the editors responsible for this story: Thomas Kutty Abraham at tabraham4@bloomberg.net, Yudith Ho