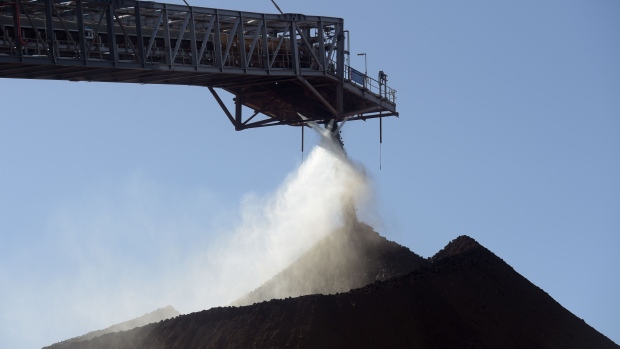 A conveyor belt transports iron ore to a stockpile at the Gudai-Darri mine operated by the Rio Tinto Group in the Pilbara region of Western Australia, Australia, on Tuesday, June 21, 2022. Gudai-Darri, with an annual capacity of 43 million tons, is expected to increase iron ore production volumes and improve product mix from the Pilbara from the second half of this year, according to a company statement. Photographer: Carla Gottgens/Bloomberg , Bloomberg

(Bloomberg) -- Fortescue Metals Group will spend $6.2 billion over the next decade to decarbonize its iron ore operations, as the Australian miner founded by billionaire Andrew Forrest attempts to eliminate fossil fuels from its business by 2030.

The Perth-based company will spend $3.2 billion to construct 2 to 3 gigawatts of renewable energy, battery storage, transmission lines and onsite charging infrastructure at its projects in Western Australia’s Pilbara region, it said in statement on Tuesday.

The renewable energy will replace diesel at its mines and help it reach “real zero” emissions, defined as no fossil fuels and no carbon offsets, “wherever possible,” it said.

Fortescue will also spend $1.3 billion on a fleet of low carbon vehicles, $900 million on new infrastructure, and $800 million on “demand response,” it said. The majority of the investment will be made between 2024 and 2028.

The plan is more ambitious than those of its larger rivals BHP Group and Rio Tinto Group. Rio aims to reduce its operational emissions by 50% by 2030, while BHP is looking for a 30% cut, with both targeting net zero by 2050.

Fortescue’s 2030 emissions targets apply only to its Scope 1 and 2 emissions, from direct energy and electricity use. As with BHP and Rio’s targets, they do not include Scope 3 emissions, which include those released by customers during the steelmaking process. Fortescue says it will reach net zero Scope 3 emissions by 2040.

Forrest has talked up business opportunities in clean energy, and set up Fortescue Future Industries in 2020 with a promise to manufacture 15 million tons of green hydrogen by 2030. But so far the company has invested little in building the hundreds of gigawatts of renewables needed to manufacture that hydrogen.

Fortescue’s Pilbara plan would “save some $4 a ton in operating costs” and “add 50 cents at least to shares through simply eradicating fossil fuels,” Forrest said in a group call with media from New York late Monday. The company’s announcement put the energy savings at $3 billion by 2030.

Meeting the target of “real zero” in its operations by 2030 would be “a serious challenge,” Tim Buckley, an energy analyst at Climate Energy Finance, said in an interview. “Can it be delivered on time by 2030? It would be a world first if it was,” he said.

Wind and solar plus batteries could supply 80% of Fortescue’s energy needs, Buckley said. Reaching the last 20% would be difficult without gas or diesel as it “has never been done anywhere in the world at commercial scale without a price on carbon or an existing grid,” he said.