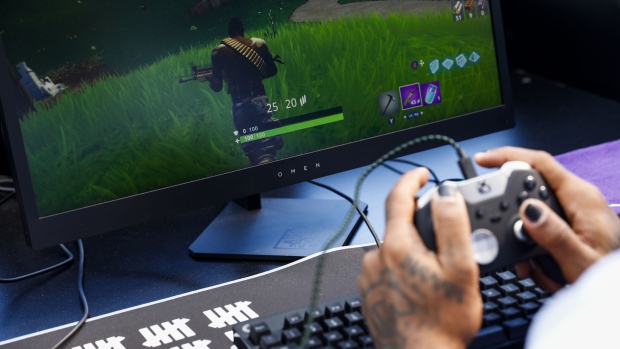 Debbie Vitany is fighting a losing battle against Fortnite.

Her 17-year-old son, Carson, has been logging 12 hours a day on the video game, searching for weapons and resources in a post-apocalyptic world where the goal is being the last person standing. Teachers complain he falls asleep in class and his grades have plummeted.

“We’d made some progress in getting him to cut down his Fortnite hours and get better sleep, but he’s slipped back into his old habits,” Vitany, who lives near Saginaw, Michigan, said in an interview. “I’ve never seen a game that has such control over kids’ minds.”

Vitany’s anguish is echoed by an army of other parents, teachers and bosses around the world grappling with a game that sucks up hours of players’ time -- sometimes to the detriment of other activities. More than 200 million people have registered to play Fortnite, which has become a billion-dollar business for its creator, Epic Games Inc. Some desperate parents have sent their kids to rehab.

“This game is like heroin,” said Lorrine Marer, a British behavioral specialist who works with kids battling game addiction. “Once you are hooked, it’s hard to get unhooked.”

Epic has issued past warnings about avoiding Fortnite scammers, but it declined to comment on the addiction issue.

Video-game addiction isn’t new: Parents and teachers have been carping about distracted children -- and their joystick-addled hands -- since the days of Atari consoles. But the ubiquity of Fortnite has created a more widespread menace. And it’s happening against the backdrop of broader concerns about social-media and smartphone overuse.

Fortnite, first released in its popular “battle royale” mode in September 2017, isn’t just causing problems for kids. An online U.K. divorce service says 200 petitions cited Fortnite and other video games this year as the reason for the breakup of marriages.

Professional athletes are getting hooked, too. The National Hockey League’s Vancouver Canucks had so much trouble getting players to meetings and dinners they banned Fortnite on the road. David Price, star pitcher for Major League Baseball’s World Series-winning Boston Red Sox, was scratched from a May start against the archrival New York Yankees because of wrist problems that may have been exacerbated by Fortnite playing.

Randy Kulman, a child psychologist in Wakefield, Rhode Island, has seen a surge in parents taking their kids to counseling because of video-game addictions.

“I had a 13-year-old in my office who said he had 300 Fortnite wins,” Kulman said. “I had to stop for a minute and calculate what he had to invest just to get those.”

Michael Jacobus, who runs the Reset Summer Camp for kids with addictions, said about 60 per cent of the 120 children he counseled at camps in Santa Barbara, California, and Asheville, North Carolina, last summer were playing Fortnite excessively. Treatment involves a technology detox -- their devices are taken away -- combined with healthy eating, sleep and group therapy. Next summer, he plans to enroll more than twice as many kids, with additional locations in Texas, Indiana and New York.

Fortnite is particularly compelling because the battle-royale version is free to play and available on a range of devices from phones to gaming consoles, notes Cam Adair, who dropped out of high school at age 15 due to his own video-game addiction and now speaks on the subject to schools and others groups. Fortnite players compete in 100-person fights until the last one is standing -- matches that make it difficult to quit once they’re started.

“It’s World War III if a parent asks their son to come to dinner because if they leave they lose,” Adair said.

While the game is free, Epic has created opportunities to sell hundreds of dollars of add-ons -- including exotic weapons and “skins,” such as Dark Voyager, a black space suit with reflective striping -- on credit cards. The company recently partnered with the National Football League to sell jerseys based on players’ favorite teams.

“Parents have lost substantial amounts of money by not paying attention to whether their credit card is tied to the game console,” said Marer, the behavioral specialist.

In October, Epic capitalized on Fortnite’s popularity by raising US$1.25 billion from an investor group that included KKR & Co., Vulcan Capital and Kleiner Perkins. The deal values the closely held company at US$15 billion.

Video games have generated a backlash before. The Grand Theft Auto series, made by Take-Two Interactive Software Inc., has at times been banned in countries around the globe for its extreme violence and sexual content. The industry has also drawn criticism following mass shootings that involved individuals linked to video games.

In April, Dutch gaming regulators released a study stating that “loot boxes,” where players purchase merchandise in a game without knowing exactly what they are getting, amounted to gambling and can be addictive.

For now, Fortnite is the game of choice. On a recent afternoon, the game was the most-viewed on Amazon.com Inc.’s Twitch streaming service, with 250,000 people watching others play.

The World Health Organization designated “gaming disorder” as a disease for the first time in June, a move that could make it easier for parents to seek reimbursement for treatment from insurers, according Paul Weigle, a psychiatrist in Mansfield Center, Connecticut.

Weigle, who’s seeing about 20 compulsive Fortnite players, recommends that parents keep kids under 10 from playing video games. And parents need to set limits when they do play. As games get more sophisticated in their ability to hook fans, he sees the issue of addiction only growing.

“It’s going to be more of a problem than it is now,” Weigle said.