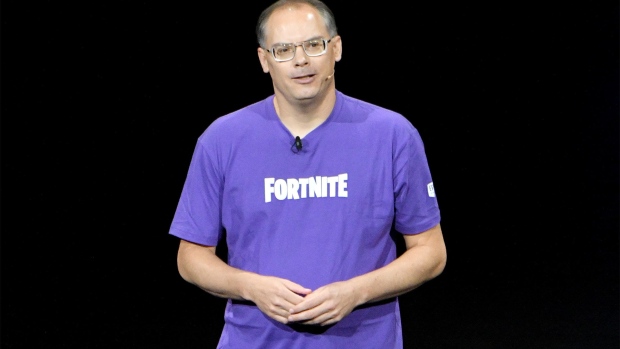 Tim Sweeney has made a habit out of picking fights with Big Tech.

Half a decade ago, the billionaire founder of Epic Games Inc. sparred with Microsoft Corp. over the way the software giant treated small application developers. Now he’s launched a legal broadside against the biggest app stores in the world with a lawsuit alleging that Apple Inc. and Alphabet Inc.’s Google are a harmful duopoly.

It’s a battle meant to help his company, which makes the gaming phenomenon Fortnite and operates the video-chatting service Houseparty, but also one that probably fits with his view of himself.

People who know Sweeney or have followed his career say he sees himself as fighting for the common man. There’s little that’s common about being a billionaire 10 times over. Yet he has incentive to stand up to tech titans on behalf of the developers, who toil away at games but have scant pricing power and are beholden to app stores and their sometimes byzantine rules.

“This is a philosophical position,” said Lewis Ward, research director of gaming at IDC. “He is taking the bullet for the team, if you will. His goal is to change the revenue dynamics.”

In 2016, Sweeney criticized Microsoft over concerns that the tech giant was “monopolizing app distribution and commerce” through its own PC apps store. Microsoft ended up tweaking its strategy, but largely because of a changing competitive landscape.

By 2018, Sweeney had opened the Epic Games Store, which charged game developers much lower fees than its rivals right from the start. The impact was immediate. Just before the launch, competitor Valve began to share more money with its biggest developers.

For the last two years, Sweeney has been speaking out against Apple and Google for charging developers fees of as much as 30 per cent -- versus Epic Games Store’s 12 per cent. Now Sweeney is trying to take on the companies in court for removing Epic’s Fortnite app after it tried to bypass their fees.

Apple won an early round on Monday, when it was spared having to reinstate Fortnite on its app store. But a federal judge granted Epic’s request for a temporary order blocking Apple from limiting the game developer’s ability to provide Unreal Engine, a key graphics technology, for other apps.

Many developers, especially independent ones and those using Epic’s Unreal Engine to make their games, are backing Sweeney. That includes a former nemesis: Over the weekend, Microsoft supported Epic’s position in a court declaration.

Sweeney, 49, can afford to throw a lot of resources into the fight. Epic recently raised US$1.78 billion in funding, including US$250 million from Sony Corp., at a valuation of US$17.3 billion.

He founded what became Epic nearly three decades ago when he was still a student at the University of Maryland and later relocated the company to Cary, North Carolina. Epic continues to be controlled by Sweeney, who is known for his love of hiking and his efforts to conserve forests.

Alan Weakley, director of the Herbarium at University of North Carolina at Chapel Hill, who has hiked with Sweeney, said he loves asking about rare plants and what the land might have looked like 500 years ago. Sweeney has bought up thousands of acres of land for parks.

“My sense is that he believes that the regular person should have access to technology and access to things that are being put out there,” Weakley said, adding that Sweeney “believes in the common person and their rights.”

A former employee called Sweeney “a big kid” in a Wall Street Journal article last year, reporting that he’d seen Sweeney “jump on a small trampoline in the office and roller-blade around the company’s parking lot.”

“I am single, unmarried, no kids,” Sweeney told the newspaper in 2019. “So I lead a fairly simple life. I love going off the trail and finding things that I think nobody’s ever seen before.”

Epic declined to make Sweeney available for an interview.

Sweeney is a private person whose personality shines in his Twitter posts. He once likened Apple to a department of motor vehicles. In an Aug. 17 post, he said, “I’m fighting Apple policies while tweeting on iPhone. Don’t hate the players, hate the game.”

In late July, Sweeney tweeted that “Apple is one of the greatest companies that has ever existed, perhaps the greatest. But they’re fundamentally wrong in blocking competition and choice on devices they make, and that holds up entire fields of technological progress.”

In a recent Bloomberg TV interview, Sweeney talked about how an Apple lawyer sent Epic a letter prohibiting the company from launching its own app store inside of Apple’s. Epic initially hoped to launch a store for iOS devices in 2019, according to an interview with Game Informer.

“They don’t allow competing stores -- like imagine a town that only allowed a Target and disallowed any other stores from building,” Sweeney told Bloomberg TV’s Emily Chang. “I mean, that’s totally un-American and uncompetitive. But that’s exactly what Apple does in an absolute sense.”

Sweeney’s legal challenge may be difficult to win. The judge assigned to the suit sided with Apple in a similar antitrust case seven years ago.

“The legal argument is very plausible, and the facts are strong for the plaintiff, and the plaintiff has an extraordinary legal team, and they are willing to put extraordinary resources into this.” said Christopher Sagers, a law professor at Cleveland State University. “I’d give them 40 per cent to 50 per cent odds of winning.”

Sweeney’s legal team includes Christine Varney, who is the only person to have served as both U.S. assistant attorney general for antitrust and as a commissioner of the Federal Trade Commission.

The case could take as long as five years to play out, said Jennifer Rie, senior analyst for antitrust litigation for Bloomberg Intelligence. She thinks it may be tough for Epic to prevail.

Beyond Sweeney’s philosophical objections, there are business considerations at play for Epic.

“He wants to put the Epic Games Store on mobile and other platforms and turn that into the game distribution channel of choice, creating an alternative to Apple’s App Store and Google Play,” said Matthew Kanterman, an analyst for Bloomberg Intelligence. “Whereas right now, excluding China, there are no alternatives.”